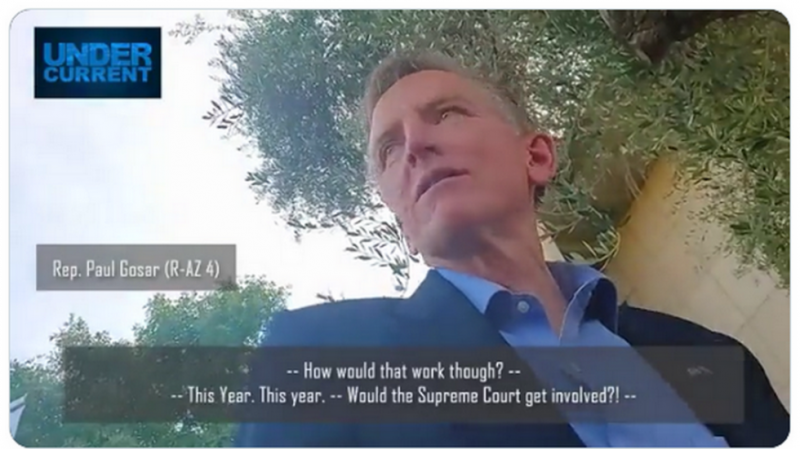 In footage released by The Undercurrent – which has essentially framed and promoted themselves as a left-wing Project Veritas – a man identified as Gosar is talking to multiple people and saying there is “no way” Donald Trump lost the last election and saying the election being fraudulent has already been proven – though numerous lawsuits filed by the Trump campaign alleging widespread fraud in the November elections have been dismissed.

Asked what he is seeking to do about the election, Gosar said, “My suggestion … is that we actually have some hearings and set a new election for Biden and Trump before the end of the year.”

The Arizona Republican goes on to comment that there was “fraud everywhere” in the presidential election, and he goes on to call for a chance to “do it again.”

The video was reportedly taken in Phoenix on Friday.

Gosar has not directly addressed the video, but his comments about a “new election” this year sent Trump critics into a tailspin on social media, with some activists spinning Gosar’s comments as part of the alleged effort by the Republicans “to overthrow democracy.”

“Sheer insanity. But, in Rep. Gosar’s defense, he sounds drunk out of his mind,” legal scholar and liberal pundit Laurence Tribe tweeted, one of multiple messages arguing that Gosar’s speech was slurred in the video.

Gosar remains a vocal Trump supporter and has continued to question the results of the presidential election, even leading multiple siblings of the congressman to pen an open letter in August claiming their brother “betrayed America.”