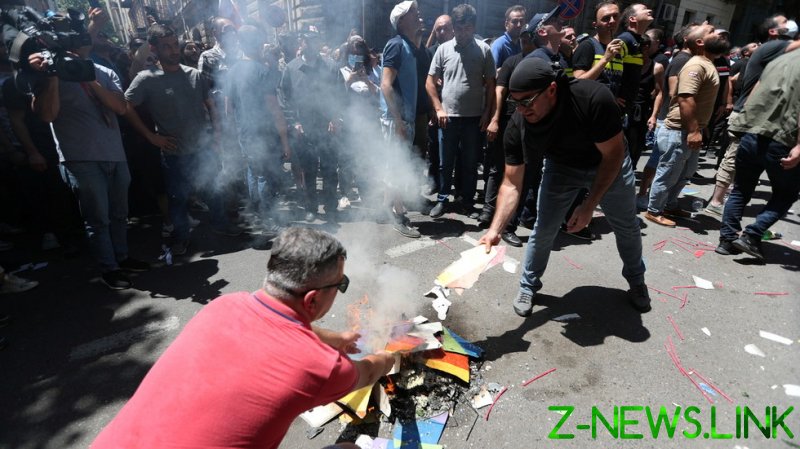 The violence came after Prime Minister Irakli Garibashvili attacked the march as “unreasonable,” claiming that the Pride event, named ‘The March of Dignity’, had been organized by the “radical opposition” that seeks to “spark tension” and destabilize the country.

“The march scheduled today carries risks of civic confrontation because the march is unacceptable to the vast majority of the country’s population,” he said, according to the Georgian news website Agenda.

Following Garibashvili’s comments, homophobic far-right mobs stormed the offices of the march’s organizers, who, in turn, accused the government of failing to fulfill its direct responsibilities.

“Such inactivity, and using the political power of hateful groups as a weapon, resulted in attacks on the offices of Tbilisi Pride and the Shame Movement, and violence against journalists in the presence of the police,” a statement said, accusing the government, the Orthodox Church, and ‘Pro-Russian forces’ of being behind the attacks.

The country’s religious patriarchate had planned a prayer service opposing the march.

“The huge wave of hate we are watching right now is inspired and support by the government and the police,” the organizers said.
Videos posted on social media show a right-wing mob tearing down the LGBT rainbow flag in front of the Tbilisi Pride offices.

Local reports suggested at least 20 journalists covering the event were attacked by the anti-Pride activists, with the country’s interior ministry announcing it would be launching an investigation.

In response to Monday’s event, several Western embassies in Tbilisi, including the American, British, and German, released a joint statement condemning the “violent attacks on the civic activists, community members, and journalists.”

“We call on all Georgia’s leaders and law enforcement to act swiftly to protect those exercising their Constitutional rights to freedom of expression and assembly, to protect journalists exercising freedom of the press, and to publicly condemn violence,” the statement said.