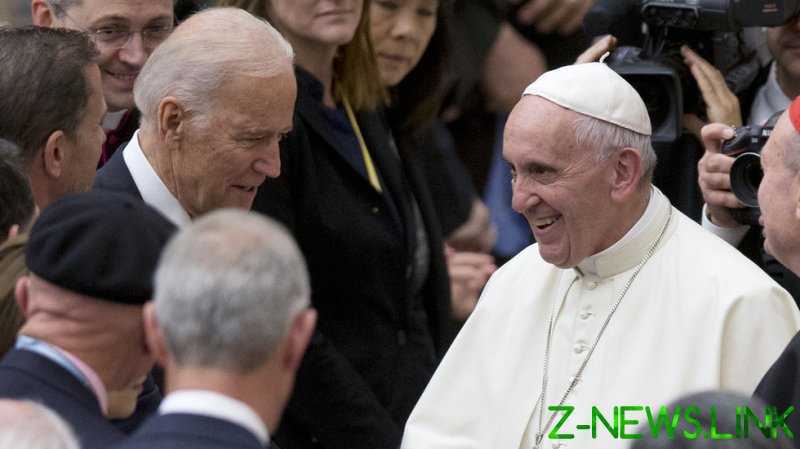 The live feed of Biden’s visit to the Vatican on Thursday was cut earlier than expected, right after his arrival at the courtyard of the Apostolic Palace. There was none of the expected coverage from inside, where the head of the Catholic Church and one of its most powerful secular congregants would meet. Edited footage of the encounter would instead be provided to accredited media outlets, the Vatican’s press service promised.

Biden is the second Catholic president of the US after John F. Kennedy. He has met with Pope Francis on three occasions in the past, but this is the first meeting during his time in the Oval Office.

The more conservative elements of the Church have cast doubt on the extent of the president’s religiosity, arguing that Biden’s support for abortion rights should make him ineligible to receive Holy Communion. The Pope has maintained the unwavering Catholic position that terminating a pregnancy amounts to murder. However, he also called for “compassion” rather than “condemnation” of those whose views deviate from that stance.

Some commenters on Twitter speculated that Biden’s no-broadcast treatment, which differed from the way other international dignitaries have been welcomed by the Vatican, may have been intended as a subtle signal of disapproval from the more critical cardinals. Cameras at the palace are usually turned off only when Pope Francis and his visitor leave the public space for a private conversation in the pontiff’s personal library.

Others suggested the change in protocol may have been discreetly requested by the US to insulate the gaffe-prone president from potential embarrassment.

Either way, anti-Biden commenters celebrated what they perceived as the slight leveled at the Democratic Party leader.

The Vatican has restricted media access in recent months, citing Covid-19 concerns, so live broadcasts of public meetings have been an essential tool for journalists covering any event taking place in the Catholic seat of power. Some outlets have protested about the new rules, saying they went too far and curbed the freedom of the press.

Asked about the sudden cancelation of the live broadcast, White House spokesperson Jen Psaki merely noted that Biden was a guest of the Vatican and was therefore observing his host’s rules.