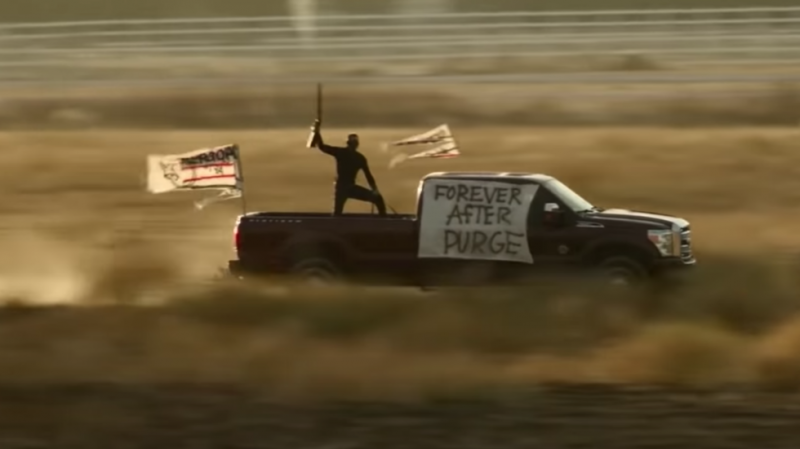 There is no questioning the success of the ‘Purge’ franchise. The 2013 original was part of a wave of micro-budget horror flicks that helped the now-juggernaut studio Blumhouse stand out.

Now, with four movies behind it (plus two seasons of a show already forgotten by most), ‘The Purge’ barely reflects the concept creator James DeMonaco pitched to the world back then: what would it look like if all crime were legal every year for 12 hours in the United States?

The idea led initial films to take B-movie dives into the concepts of societal facades, revenge, and class warfare.

DeMonaco noticeably switched gears, however, when he appeared to grow as obsessed with the rise of Donald Trump as any loyal CNN consumer.

There was 2016’s ‘The Purge: Election Year’, which committed to the half-baked idea that the annual ‘purge’ in the films is a construct of malicious right-wingers who are looking to rid society of who they deem to be too weak – and in DeMonaco’s mind, this equates to mainly minority characters.

As Trump continued to rise, and pundits worked overtime to sell the idea that every single Trump voter was a racist seeking to normalize white supremacy, DeMonaco’s bad writing habits just got worse. He got less and less interested in characters and stories and instead used his creations as pawns to create a campy, grindhouse-lite world for other frustrated liberals.

Thus we have 2018’s ‘The First Purge’ – which informs us that, again, evil right-wingers definitely only made the ‘purge’ to wipe out minority neighborhoods – and this weekend’s ‘The Forever Purge’, which somehow is even more obvious in its attempts to be politically ‘relevant’.

The film’s antagonists, who want a ‘purge’ that never ends until they have wiped out everyone they deem unfit to live in America, are poorly constructed caricatures based on liberal fantasy. They drape themselves in American flags, pose with AR-15s, and say things like, “We are the real patriots of America,” and “America will be America once more.”

The movie’s other characters aren’t much better. Actor Josh Lucas appears as a Texas rancher and pseudo-racist, and his saint-like Mexican workers are cardboard cutout celebrations of immigration who go into bizarrely on-the-nose discussions about the cultural melting pot of America. The film’s protagonists must get to Mexico which, like Canada, has opened its borders for a limited time to American refugees seeking to escape the ‘purge’.

You read that correctly. That is the plot. This is a horror movie about a bunch of ‘patriotic’ white dudes hunting down minorities with the permission of their right-wing overlords – the oh-so-cleverly named New Founding Fathers of America – while a white Texas family seeks refuge in Mexico with the help of their perfect and perfectly misunderstood Mexican workers. This isn’t exactly the type of movie that believes in nuance or allowing viewers to draw their own conclusions about the points being made.

As his films have gotten more overtly political, so has DeMonaco, who continues to write the installments to his franchise. Reading an interview with him is like living in a world where someone suddenly allowed Brian Stelter behind a camera.

In a recent interview with ComicBook.com, DeMonaco bragged about how his filmmaker friends asked him how he could have predicted the January 6 Capitol riot – ‘The Forever Purge’ was made before the riot and delayed due to Covid-19 – as the display of violence from Trump supporters seemingly fits the extreme narrative sold in ‘The Forever Purge’. What DeMonaco appears to take no inspiration from are the numerous other examples of political violence that led up to the Capitol riot, including numerous Antifa demonstrations and Black Lives Matter protests descending into violence. In DeMonaco’s world, though, it has reached the point where the only people generally capable of violence are rabidly racist white people who don’t vote Democrat.

Like ‘Saturday Night Live’ – which has become little more than a political tool to swipe at conservatives – the ‘Purge’ franchise has lessened in quality as it focuses more on politics, but it also earns plenty of praise for ‘daring’ to make its cookie-cutter liberal points.

“This Gun-Happy MAGA Takedown Packs an Unsubtle Punch,” IndieWire’s review of the film is headlined.

It’s like ‘Purge’ presents so many generalized, extreme points about modern-day conservatives that some critics are too giddy at the thought of Hollywood validating their echo chamber belief system to actually recognize they are watching lazy virtue signaling disguised as a story.

Nothing we see in ‘The Forever Purge’ is fresh in any way. The attempts to take on race and patriotism in the film are done with a similar level of thought as a typical Twitter debate.

The cleverest ‘The Forever Purge’ gets is DeMonaco desperately squeezing in any and every reference to viral moments in recent politics, like the phrase “bad hombres” being thrown around, a cringe-inducing reference to Trump’s infamous use of the term in 2016. It’s only impressive that DeMonaco not only wrote the awful reference in the first place, but then decided to commit to its awfulness and keep it in the movie.

If the ‘Purge’ movies have proven one thing with their increasingly preachy and annoying material, it’s that wokeism and virtue signaling really have become defining characteristics for some in our culture; and, more importantly, wokeism can ruin anything, even a promising grindhouse franchise that promises thrills and intrigue only to blindside you across the head with a television set that only plays a rotation of triggered and emotional CNN hosts.