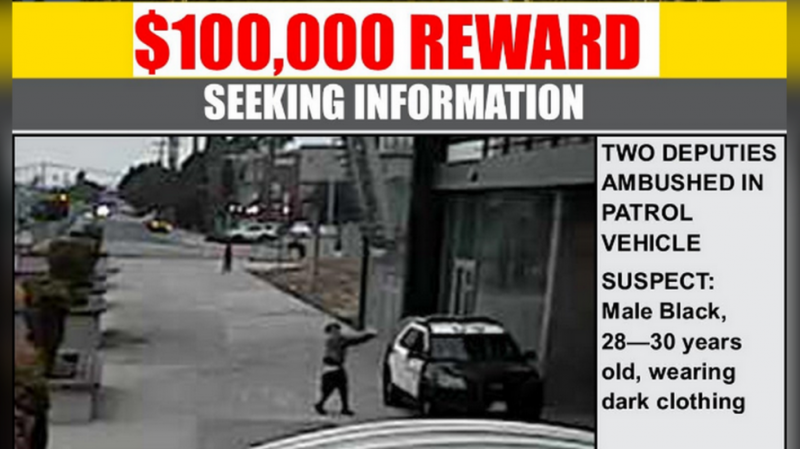 “The Los Angeles County Board of Supervisors has authorized a $100,000 reward for information leading to the arrest and conviction of the suspect,” the LA county’s five-member governing body announced on Sunday, as the point-blank shooting of two police officers near a metro station in the city of Compton has attracted nationwide attention, including that of US President Donald Trump.

An unknown attacker, who could be seen on a surveillance video released by the Los Angeles County Sheriff’s Department, approached the patrol vehicle and discharged his weapon multiple times, heavily injuring two deputies inside, a 31-year-old female officer and her 24-year-old male partner.

The assailant could be seen leaving the scene unimpeded as one of the stricken officers struggles to open the vehicle’s door. Despite having been severely hurt by the barrage of gunfire, the officers radioed for help and were taken to hospital in critical condition.

While the blurry footage released by the department gives away few clues as to the suspect’s appearance and even his gender, prompting speculation online that the attacker could have been a female or even a child, the LASD said that the “suspect is described as a male Black 28-30 years-old.”

The execution-style shooting has prompted the outpouring of support for the officers, with Los Angeles County Sheriff Alex Villanueva offering his “appreciation for the overwhelming support being offered from all over the Nation,” but also sparked protests outside the hospital ward where the officers were being treated for their wounds.

The activists allegedly tried to storm the emergency room, blocking entries and exits to the hospital, and the chants “we hope they die” rang out in the crowd, police said. Two people were arrested.

With deputies believed to be clinging to their lives, Trump has called the attacker “animal” and called for “a fast trial” and a “death penalty” for the shooter if officers do not make it.