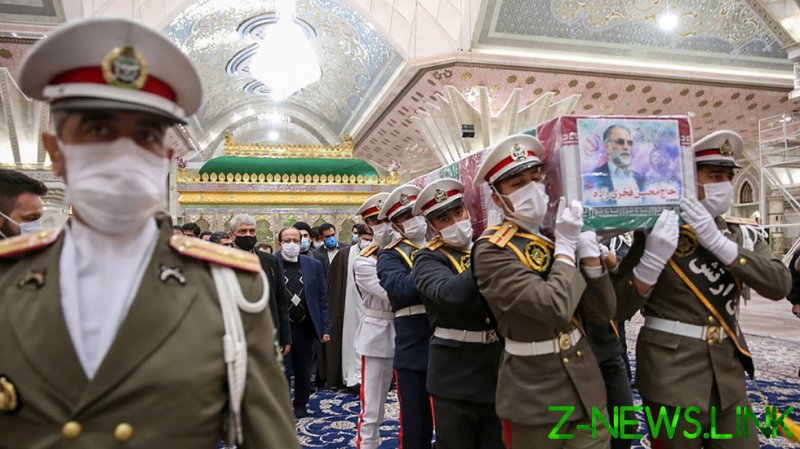 Citing “new details” obtained by its journalists from unidentified sources, Fars said on Sunday that the lead security vehicle in scientist Mohsen Fakhrizadeh’s three-vehicle convoy of bulletproof cars left its escort position to prepare the arrival location in Absard, east of Tehran.

Just then, the car carrying Fakhrizadeh and his wife was hit by bullets. He got out of the vehicle, thinking the sound was caused by an accident, engine trouble or an obstacle. A remote-controlled machine gun mounted on a Nissan car 150 meters away then fired at the scientist, hitting him twice in the side and once in the back, severing his spinal cord.

A bodyguard who tried to protect Fakhrizadeh was subsequently shot several times. The Nissan then blew up. Fars said the assassins deployed no live agents at the scene of Friday’s attack, which lasted about three minutes. The unidentified owner of the Nissan left the country, Fars said, without identifying the destination.

The latest description of the ambush contradicts previous reports by Fars and other news outlets. The new details were reported only in Persian at the time this article was published.

Earlier Sunday, Mohamad Ahwaze, an Iranian journalist based in London, said the attack was carried out by a dozen operatives who sprung upon Fakhrizadeh’s convoy in a roundabout at the entrance to Absard. The attackers, who had the skills of “special forces in advanced armies,” reportedly were backed by a 50-person logistics team that infiltrated Iranian security services and carried out such tasks as cutting off electricity to the area 30 minutes before the ambush to slow any response to the assassination.

Ahwaze cited leaks from Iranian government officials and the elite Revolutionary Guard for details of the attack, including the fact that the hit squad knew when and where Fakhrizadeh would be. The attackers rode in a Hyundai Santa Fe and on four motorcycles. After the car in front of Fakhrizadeh’s vehicle passed, the attackers blew up a Nissan to block the vehicle behind him. They then opened fire at Fakhrizadeh’s car and the security vehicle in front of him.

The leader of the hit team took Fakhrizadeh out of his car and shot him dead. All of the commandos escaped the scene without injury or capture.

Meanwhile, Fars itself posted another article on Sunday, shown on the news agency’s English-language website, saying “eyewitness accounts” confirmed that Fakhrizadeh was attacked by “terrorists who sprayed bullets at his car.”

Top Iranian officials blamed Israel for being behind the killing, as the Jewish state had been accusing Fakhrizadeh of leading a nuclear weapons program. Tehran denies ever trying to militarize its nuclear industry. Israel has yet to comment on Iranian accusations.