Home / WORLD / Kamala’s ‘America is Back!’ tour will flop as US doesn’t have a strategy for Southeast Asia beyond sabre-rattling. China does

Kamala’s ‘America is Back!’ tour will flop as US doesn’t have a strategy for Southeast Asia beyond sabre-rattling. China does 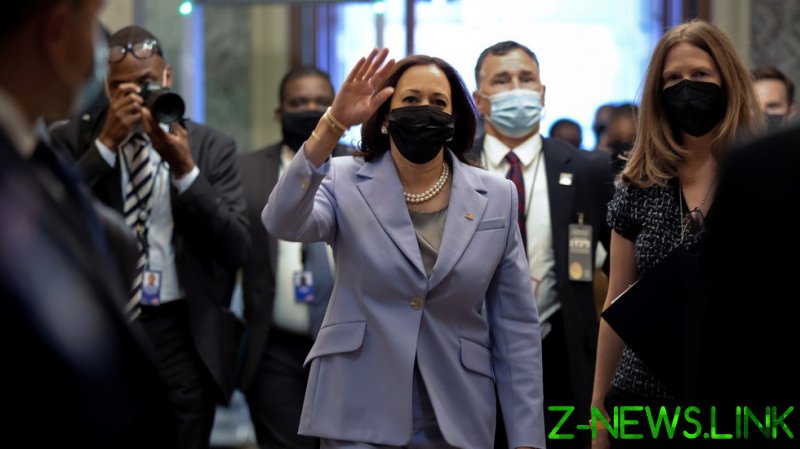 As the Biden administration consolidates its foreign policy, it has predictably turned its attention towards Southeast Asia in a bid to counter China. Last week, Defense Secretary Lloyd Austin visited Vietnam, the Philippines, and Singapore in a bid to shore up military ties between Washington and the region. Now, Kamala Harris is also set to visit two of these countries (Vietnam and Singapore), where the reported main message will be ‘America is Back!’ – a sentiment which will no doubt go down a storm in Hanoi.

The vice president’s aim with this trip is to call out China over its maritime claims in the South China Sea. This comes amid America’s attempts to militarize the region through coordinating with other powers such as Japan, the UK, and Australia, whilst also sailing aircraft carriers through the sensitive waters in a bid to project American power. It comes as Chinese Foreign Minister Wang Yi attends the ASEAN-China ministerial meeting, where he has warned against “external interference” by “extraterritorial powers” in the region. No prizes her for guessing who he was talking about.

The US says that it’s “back” to Southeast Asian countries, but the reality is this: apart from sabre rattling and pushing opposition to China, the United States actually doesn’t have a strategy for the region, and Beijing does. In many ways, the legacy of recent US policies in this area of the world has been self-defeating, to say the least, and the political space that Biden has to turn it around is limited. In other words, it’s essentially still Trump’s ‘America First’ sentiment. The biggest gaping hole in America’s strategy towards Southeast Asian countries is failing to offer them an economic incentive to oppose China.

On this front, America has isolated itself, most notably by withdrawing from the mega trade deal which Obama fashioned as an anti-China initiative known as the Trans-Pacific Partnership (TPP), now rebranded CPTPP (Comprehensive and Progressive Agreement for Trans-Pacific Partnership) amongst local partners. On the level of US domestic politics, this is toxic because the consensus is that free trade is bad, especially if it detracts from jobs at home. Therefore, Biden faces protectionist pressure not to re-join it, thus it has not come back on the agenda. China, on the other hand, has comprehensively doubled down on its economic ties with the surrounding region and entrenched its presence, most notably through joining the ASEAN-led Regional Comprehensive Economic Partnership, which it quickly ratified.

This creates an obvious problem for America. China is increasingly integrating itself with the region on an economic level, which local parties welcome, but the United States is not. China has, in addition, begun to move away from the US dollar in its business with these countries. This includes a local currency trade agreement with Indonesia and the setting up of an RMB bank in the Philippines, amongst other things.

The US doesn’t have an answer to any of this. Recently, it was reported that Washington wanted to try and propose a ‘digital trade deal’ among the economies of the Asia-Pacific which would seek to lock China out by setting strict rules and regulations on the ‘digital economy’ of the region. Diplomatic sources dismissed it as a complete non-starter. Why? Because it’s absolutely untenable for these countries to lock China out, and it’s not hard to see why. Yesterday Huawei announced it would be investing $100 million into over 1,000 software start-ups throughout Southeast Asia. With a high degree of integration and economic benefits, it is impossible for the US to now shape the region’s initiative while keeping China excluded.

This leaves the military dynamic, where China is increasingly powerful, but the US remains competitive and relevant. Many countries in the region accept the presence of the United States and its allies militarily, because it gives them strategic space to prevent them from being completely dominated by China. For a small city state like Singapore, this inclination makes obvious sense, but this is not so much ‘siding’ with America as it is a geopolitical balancing act between both powers. Here lies the problem: America wants countries to align with it against China in a binary way, but the nations themselves want neutrality, and ASEAN as an institution officially seeks such. Singapore’s prime minister stated several days ago that it seeks balance between both powers, and did not want to become torn between them.

Some of these states of course are formally allied with America, such as the Philippines, yet for all intents and purposes they utilize a strategy of ‘hedging’ between both sides and almost certainly do not seek confrontation with Beijing. If Washington pushes too hard on anti-China initiatives, these countries become uncomfortable, and this may have the ‘opposite’ result. Recognizing what the US is doing, China is now pre-empting it by making diplomatic breakthroughs and concessions on the ‘South China Sea code of conduct’ – a proposal that has been in gridlock for decades, aims to ease tensions, and brands the US a ‘troublemaker’. Again, Washington doesn’t have the ability to conduct close diplomacy with these countries as a neighbour, only as a ‘visitor’.

All in all, geography works against America. China is the neighbour of Southeast Asia, not the US. Beijing is the largest economy in the region and is irreversibly integrated in terms of trade, technology, and finance. America is not. Yet, the US foreign policy strategy seems to pursue the bizarre premise that they can dominate this region, push back China and match its growing power, despite the fact they can’t, because they are not based there.

This means that whilst these countries are not necessarily rejecting an American presence, they are never going to adopt any serious anti-China policies or the sabre-rattling Biden hopes. Would you start a fight with your much bigger next-door neighbour? Biden has no economic incentives to offer either, due to his hands being tied; as a result, China is, in many ways, continuing to lead and shape the regional agenda through its own initiatives, and as its own military presence in this area also grows, it has plenty of options to counter US posturing.