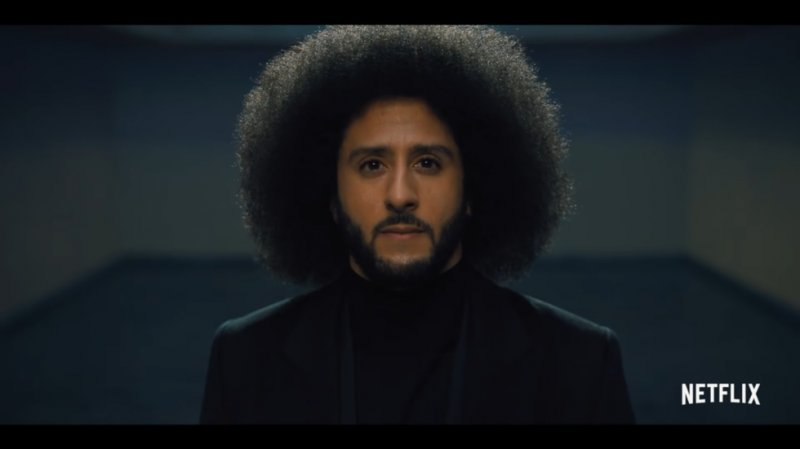 ‘Colin in Black and White’ is the new mini-series on Netflix that dramatizes Colin Kaepernick’s teenage years, where he struggles against racism and to be taken seriously as a quarterback.

Kaepernick once led the San Francisco 49ers to the Super Bowl and made a name for himself by kneeling during the national anthem at NFL games to protest against racial injustice, police brutality and systematic oppression.

I utterly loathe flag fetishism as a mindless display of vacuousness, so I never had a problem with Kaepernick’s protests. I disagree with him on the specifics of his stance, but I always respected his taking the knee. The way I see it, if the NFL wants to turn its games into de facto celebrations of militarism, then players kneeling shouldn’t be beyond the pale.

I also think it’s obvious that Kaepernick was unjustly black-balled by the league for his protests. While I admit that Kaepernick is a very specific and unique QB talent and that his skill set isn’t a fit on every team, it’s ludicrous to think he couldn’t at least have been a back-up somewhere. Of course, that brings up the question of whether he would accept that secondary role and at a price below what he thinks he deserves.

The reason I mention my moderate stance on the controversial Kaepernick is because I want to make it clear I went into watching ‘Colin in Black and White’without an axe to grind against the man. Quite the opposite actually.

Having said that, let me tell you that ‘Colin in Black and White’ isn’t just an amateurish TV show so awful it would be laughable as an after-school special, it also exposes Kaepernick as quite a despicable and deplorable human being.

This show is like the Super Bowl of self-pitying narcissism and Kaepernick is Bart Starr, Joe Montana and Tom Brady wrapped into one.

It’s utterly absurd witnessing real-life Colin watch and comment as his teenage screen version pouts and preens like a cheap tart on a red-light street over his anger and disappointment that the best colleges in the country want to give him a baseball scholarship; and Major League Baseball wants to draft him and give him a million-dollar signing bonus; and the prettiest white girls in school throw themselves at him…while all he wants is to get a scholarship to play QB and have a black girlfriend. Boo f***ing hoo.

What really turned my stomach, though, about ‘Colin in Black and White’ is that Kaepernick’s adoptive, working-class white parents, insipidly portrayed by Mary Louise Parker and Nick Offerman, are depicted as vapid racist caricatures.

The fact that Kaepernick, who co-created this series with Ava DuVernay, would belittle, and demean the couple (who are still alive) that raised, loved and nurtured him from infancy, and shelled out big bucks by paying for travel and high-end specialized QB coaches to help him achieve his dream is repugnant and repulsive.

In one episode, the show frames his soon-to-be parents as deciding to adopt Colin only after another option falls through. Kaepernick then chimes in with his woe-is-me wail that “since the day I was born, I’ve never been anyone’s first choice.”

Again, boo f***ing hoo Kaepernick, you sad sack clown. Your parents actually chose you. They got up in the middle of the night to feed you and change you, they held you and loved you, they gave everything to you and they moved heaven and earth to make your dreams come true, and because they’re a different skin color than you, you reward them, not with gratitude, or respect, or love, but with a TV show that bends over backwards to publicly ridicule them. That says more about you, Kaepernick, than it does about your parents.

Of course, Kaepernick turns everything into racism because he’s a nitwit incapable of understanding anything else. So, when he and his parents disagree over the usual things teenagers and parents disagree over – hairstyles, facial hair, wardrobe, choice in girlfriends – Colin sees this as proof of the racist conspiracy against him.

Everyone is racist in Kaepernick’s eye: coaches, referees, umpires, opposing fans, hotel employees, his parents. The fact that schools weren’t tripping over Kaepernick, too, is because of racism.

The word that kept popping into my head as I watched this self-pitying s**tshow was ‘pathetic’.  There is absolutely nothing quite as egregiously pathetic as a grown man wallowing in long past adolescent slights. Nothing.

Adding to the idiocy is that Kaepernick, dressed all in black with a massive afro, looking like Morpheus from ‘The Matrix’ wearing a wig as a joke, interjects various tidbits of knowledge about how racist America is throughout the show. Kaepernick is so hysterically ridiculous in these segments he seems like a character from Dave Chappelle on ‘The Chappelle Show’or Eddie Murphy on ‘Saturday Night Live’.

On the bright side, Jaden Michael plays teenage Kaepernick, and as bad as the show is, he’s terrific. Despite not having a lick of athleticism in his body, he’s a compelling screen presence and an actor who conveys an intriguing inner life. He’s a talent to watch.

A talent not to watch is Colin Kaepernick, whose NFL career is most certainly over, and considering his dead-eyed appearance on the self-serving, self-aggrandizing, self-pitying ‘Colin in Black and White’, which reveals his truly loathsome nature and intellectual midgetry, one can only hope he disappears from the public eye as well. The sooner the better.