Judges from Spain serve of the match “Feyenoord” – “Shakhtar” 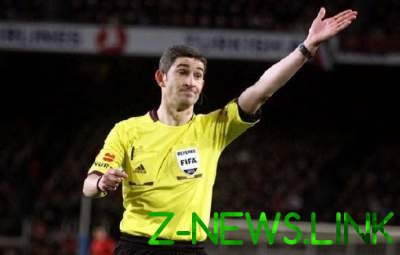 The judicial Committee of UEFA has named the referees for the Champions League match between Feyenoord and Shakhtar.

Undiano mallenco is in international matches since 2004. For the first time with the Ukrainian club, the Spaniard crossed in the 2007-2008 season when he recorded a victory of “Shakhtar” over Benfica (2:0) in the group stage of the Champions League.

In the 2010-2011 season “Dynamo” in the refereeing of Undiano mallenco in the playoffs of qualification of League of Champions has conceded “to the Ajax” (1:2), and in the 2012-2013 season, the people of Kiev in the main round of the Champions League shared the points with FC Porto (0:0).

In the 2014-2015 season Undiano mallenco twice have been members of the Ukrainian Premier League – Shakhtar in the first leg of the 1/8 finals of the Champions League drew with Bayern (0:0), and Dnipro in the second leg of the 1/4 finals of the Europa League defeated club Brugge (1:0).

Shakhtar after two rounds shares with Napoli second place in the group stage of the Champions League. At Feyenoord 0 points and 7 goals conceded in two games.

The match “Feyenoord” – “Shakhtar” will be held in Rotterdam next Tuesday, October 17.