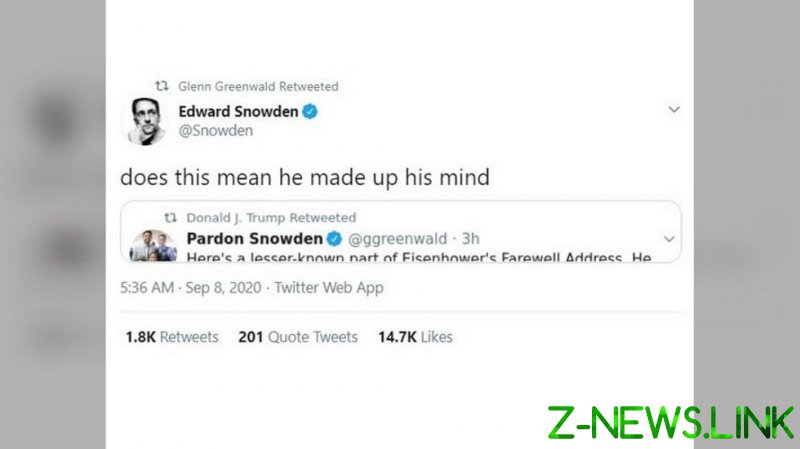 Greenwald won a George Polk Award and a Pulitzer Prize for his reporting on the global mass electronic surveillance by US intelligence, which was based on documents leaked by Edward Snowden in 2013. On Monday, he managed to deliver a call to pardon the whistleblower to the 85.8 million followers of the US President.

It started with CNN national security reporter Ryan Browne lashing out at Trump for suggesting that US military commanders had a vested interest in perpetrating wars and keeping US taxpayer money flowing to defense contractors. Browne called it “an unprecedented public attack” on the Pentagon by a sitting US president only to be confronted by Greenwald, who called him a “drama queen” and said he was obviously wrong.

President Dwight Eisenhower famously warned the country about the dangers of an unchecked military industrial complex in his farewell speech as he was stepping down in 1961. Greenwald shared clips from the address, and Trump retweeted one of them on his page.

This gave the journalist a chance for a bit of advocacy on behalf of his former source. He changed the name of his Twitter account into “Pardon Snowden”. Trump earlier floated the idea of stopping US attempts to prosecute the NSA whistleblower, who currently lives under political asylum in Russia, but never acted on it. Snowden himself apparently appreciated the gesture, wondering if Trump keeping the retweet meant he “made up his mind”.

Greenwald is not the first person to slide some activism into Trump’s feed. Fellow journalist Max Blumenthal used the same trick in June to deliver to the President’s followers a barrage of slogans like “Defund the police”, “Free Julian Assange” and “Free Palestine, Fire Jared.” That exercise was stopped short by Trump un-retweeting his post.