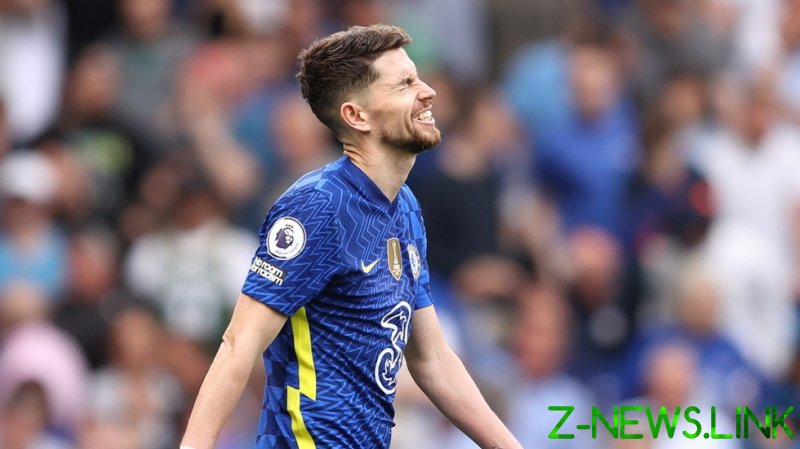 The incident occurred in the 87th minute of the London derby with the score still tied 0-0.

Refusing to change his technique despite two missed spot kicks in Italy’s unsuccessful World Cup qualifying campaign, and also one against England ‘keeper Jordan Pickford in Italy’s Euros shootout win at Wembley last summer, the Brazil-born playmaker skipped and hopped up to the ball only to tap it meekly pretty much down the middle.

Merely needing to throw himself to the floor to keep the lame effort out, Lukasz Fabianski denied the former Ballon d’Or hopeful to the misery of Blues fans worldwide.

Christian Pulisic spared Jorginho’s blushes with a 90th-minute winner that kept Chesea firmly in third place and five points clear of Arsenal with a game in hand.

On social media, however, Jorginho was universally roasted for his “worst penalty ever” horror attempt from 12 yards out.

“Reply to this tweet with a worse penalty than Jorginho’s,” demanded a popular football account on Twitter. “You won’t be able to. Not possible,” it added.

Though this didn’t stop people from trying, with Simone Zaza’s bizarre blunder at Euro 2016 for Italy eaturing heavily.

“How many goalkeepers need to save a Jorginho penalty before he changes his technique?” another one asked.

On that, someone observed: “Jorginho’s penalty miss against West Ham today is another example that goalkeepers have figured out ways to stop what used to be an almost unbeatable goalkeeper-dependent technique.”

“Goalkeepers are now more knowledgeable, clever and execute [their save] with perfect timing,” it was added.

In less serious reactions, however, one joker noted that Diana Ross fared better in the USA ’94 opening ceremony.

“Bruno Fernandes, I take it back. There is a more embarrassing penalty that I’ve now seen,” a separate party quipped, in reference to a miss from the Manchester United attacker against Arsenal on Sunday.

“Jorginho I Quit,” he concluded, as someone remarked on similar lines: “Jorginho asking Bruno to hold his beer!”

Though Chelsea have nothing much left to play for in the English top flight with Champions League qualification more or less tied up, Thomas Tuchel has a decision to make ahead of the Blues’ FA Cup Final against Liverpool on May 14.

Either the German goes for another penalty shooter if an opportunity arises in regular or extra time, or Jorginho tries a different approach against one of the world’s best shotstoppers in Brazil international Alisson, who is unlikely to be fooled by the already sussed improvisation with failure possibly seeing the west Londoners finish their campaign trophyless.