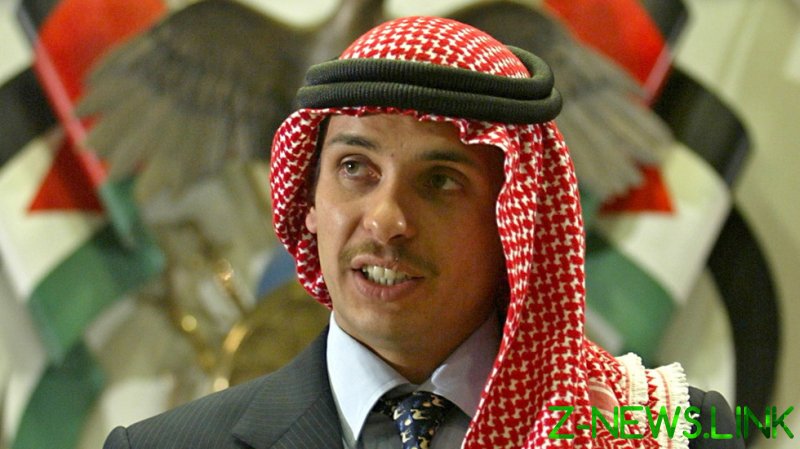 Around 20 people were arrested in a security sweep on Saturday night, including several high-profile figures such as Sharif Hassan Ben Zaid, a member of the royal family, and Bassem Awadallah, a former finance minister and head of the royal court. Both also formerly served as royal envoys to Saudi Arabia.

Amid reports that former Crown Prince Hamza bin Hussein was also detained, Jordan’s Joint Chiefs of Staff head, Major General Yousef Huneiti, said that the prince had only been “asked” to stay home and to “stop some activities that could be used to shake the stability and security of Jordan.”

Without criticizing the king directly, Hamza – who had been stripped of the Crown Prince title in 2004 but remains a popular figure among Jordanian opposition – railed against the “corrupt system” that destroys the “lives and dignity” of the Jordanian people.

“I’m not part of any conspiracy or nefarious organization or foreign-backed group, as is always the claim here for anyone who speaks out,” he said.

Jordanian authorities have yet to bring any charges against those arrested as the investigation is ongoing and its results “will be announced with full transparency and clarity,” according to state news agency Petra.

Within hours, the US and Saudi Arabia, as well as Egypt, Lebanon and Bahrain, all voiced their full support for King Abdullah II and his actions to maintain security and stability of the country.

“King Abdullah is a key partner of the United States, and he has our full support,” US State Department spokesman Ned Price said. “We are closely following the reports and in touch with Jordanian officials.”

“The kingdom affirms its full support, with all its capabilities, to all decisions and measures taken by King Abdullah and His Highness Prince Al Hussein bin Abdullah II, the Crown Prince, to maintain security and stability,” echoed a statement from the Saudi royal court.

In similar statements, the Arab League and the Gulf Cooperation Council also reaffirmed their full support and solidarity with Jordan.