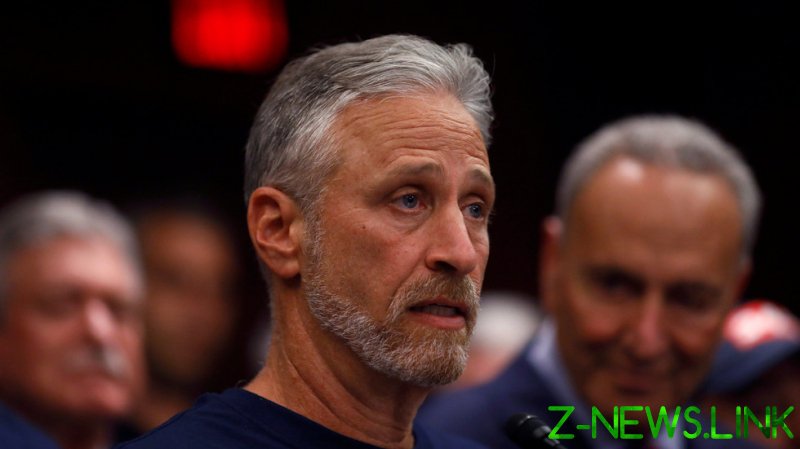 Appearing as the first guest on the first post-lockdown live show of his onetime Daily Show colleague Stephen Colbert on Monday night, at one point Stewart went on a rant about the origin of the coronavirus.

All along, Colbert seemed to be attempting to silence Stewart, or as one irate liberal tweeted, “save him from himself.” It was unclear whether he was genuinely concerned, however, or if that was an act akin to his faux Republican foil to Stewart during his Colbert Report years.

Stewart’s remarks were met by massive cognitive dissonance among his and Colbert’s fans, at least according to the tweets collected by conservative pundit Stephen L. Miller.

One fan called it “extremely irresponsible” for Stewart to go “spewing an unproven, outside theory” and giving “crazy juice” to “nuts on the right.” Another said Stewart acted like “a crazy MAGA Republican.” A third accused Stewart of “anti-Chinese rants” and Colbert of tolerating it.

“Jon Stewart was one of my idols until tonight. He’s giving credibility to the Wuhan lab leak conspiracy and spreading dangerous lies,” said another fan.

It wasn’t all visceral disavowal, however. Journalism professor and MSNBC pundit Dr. Jason Johnson fired off half a dozen tweets explaining how actually, there was “a huge difference” between what Stewart said he believes, and “the conspiracies being peddled by the Right and the former Trump administration.”

President Donald Trump promoted the Wuhan lab leak theory “as a way to stoke racism & blame China to distract from his own corrupt and incompetent [Covid-19] pandemic response,” Johnson argued.

Until last month, it was an article of faith in the global scientific community – enforced by strict censorship in legacy and social media – that SARS-CoV-2, the virus that causes Covid-19, evolved in nature and jumped to humans through some kind of animal host. No such host has ever been found. Speculation that the virus might have been enhanced through gain-of-function research at the Wuhan Institute of Virology (WIV) – partly funded by the US government, through cut-outs – was denounced as a “conspiracy theory.”

Then it suddenly wasn’t, and both social media platforms, corporate outlets and the Biden administration began treating the “lab leak” accident theory as obviously plausible and pretending they never said otherwise – to Beijing’s displeasure.

Judging by the reactions of Colbert’s audience, however, the general public is still catching up.

This has led to speculation among some conservative pundits that Stewart may have been brought out of retirement – he left The Daily Show in July 2015, to the dismay of many Democrats – to help establish the new narrative.

“I applaud Jon Stewart for showing up 18 months late and saying what everyone is already saying when it became fashionable to do so,” quipped Human Events editor Jack Posobiec.

“They trot him out as the airlock to say ‘OK, now you good normal liberal people can talk about it too’…” replied former liberal and talk show host Dave Rubin.

Stephen Miller, the commentator who collected the angry audience reactions on Twitter, noted that Stewart’s remarks would have been banned on YouTube, Facebook and Twitter as “misinformation” just months ago, but now they’re suddenly acceptable “and not a single journalist in mainstream media is asking why that is.”

“This is about how corporate media and [Big Tech] decide which information is considered crazy and a conspiracy right up until they don’t anymore. This is about power,” he tweeted.