Home / WORLD / Joke or woke? While a ‘Karen’ Halloween outfit has split opinion, it’s shown that white women are now the easiest of targets

Joke or woke? While a ‘Karen’ Halloween outfit has split opinion, it’s shown that white women are now the easiest of targets 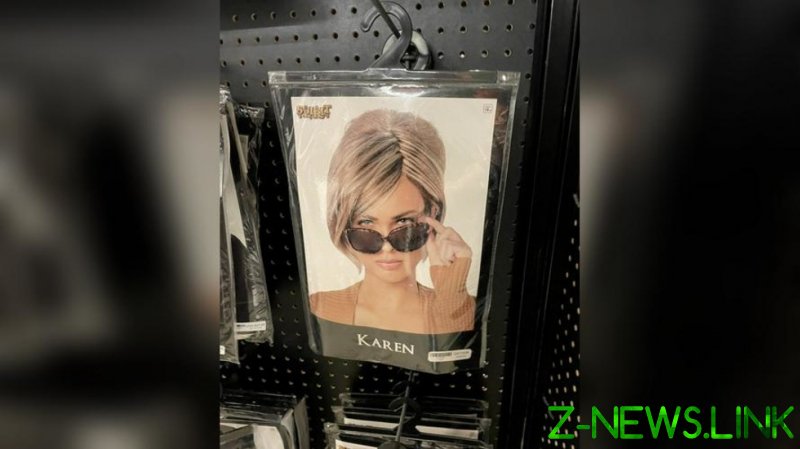 “I demand to speak to the manager!” This is the phrase a Karen is sure to scream, when she doesn’t quite get the service she expects in a shop or a restaurant or her daughter’s ballet class. Whatever.

Karen, as you may well be aware, has become the very definition of a certain kind of privileged, racist white woman whose middle-class status gives her the ability – the right, even – to be condescending to others. Especially those who are there to serve, to serve the Karens of this world.

I’ve known a fair few real-life Karens over the years and, though they can be hugely irritating, they’re not exactly ‘scary’ in the Freddy Krueger knife-handed style of ‘A Nightmare On Elm Street’ nor Jason from the ‘Friday the 13th’ horror flick series. Never mind Frankenstein or Count Dracula.

Yet there is now a Karen Halloween costume that is scaring the bejesus out of folk and stirring up something of a storm. It was first spotted in a store in the US by Twitter user Helen Shivers who captioned the snap she posted with, “and the scariest costume goes to…”

Karen doesn’t have a knife sticking through her brain nor an eye that has fallen out of its socket nor a slit throat – the kind of outfit kids will wander around US streets wearing on October 31. She’s not a vampire nor a zombie nor a space alien. Although Karen is, to some people, most definitely a monster, the only thing razor-sharp about her Halloween outfit is the outdated bob haircut.

Then, of course, the whole thing went viral. Some people thought it simply a hoot for Halloween, and some, predictably, found it offensive.

“One needs to wonder if the Chinese manufacturers of these brilliant trending costume ideas scour social media to bring us the fastest and most relevant creations that fit into our social agenda. Priceless,” said one Twitter user.

“The way people have managed to turn this into a joke is honestly so unsurprising,” added another. “A whole costume for a label that’s supposed to identify women who weaponize their whiteness to brutalize black people.”

“I don’t see sh*t funny bout that, that’s the face of either someone that’s gonna get you fired from your job or cause you bodily harm when she crashes her car into you,” said another.

However, it’s not just Halloween. There have actually been Karen t-shirts on sale for ages and Domino’s Pizza in New Zealand used her name in a promotion that also ruffled a few feathers.

Here’s my problem, though. There’s hypocrisy and inherent racism in this whole anti-Karen thing, because it’s apparent that the world of woke doesn’t offer any protection to white people such as those defined as a Karen. It’s clear that Kare’ must be destroyed because she’s viewed as racist, conservative, pro-life and highly judgmental. (She’s also very likely to call the police on you for no reason, if you’re black).

Yet if, for example, you are now a woman but were actually born with a penis, or you’re non-binary, or you’re an Afghan refugee or whatever, then you’re a protected species, sure to be mollycoddled, your feelings soothed and the language mangled in your honour. Even if you are very much in the minority in the world.

What the Karen narrative shows, it seems, is that a standard-issue white woman is the fairest of fair game these days. And that’s not equality, that’s the bullying the wokeys claim to be – in fact, should be – fighting against. Imagine the furore, for example, there would be if someone started to flog a Halloween outfit that created a negative stereotype out of a middle-aged black or Muslim woman?

In my day, the derogatory female names were ‘Sharon’ and ‘Tracy’. They came to define ‘slappers’, working-class women of easy virtue who drank too much and would invariably wake up on a Sunday morning in some stranger’s bed.

They were kinda scary too, but I don’t remember them ever being a Halloween costume. Maybe they should have been. They would have taken the heat off Karen at any rate.