Home / FUNNY NEWS / Joke of the day: desperate daredevil was flying on the chair, tied to inflatable balls

Joke of the day: desperate daredevil was flying on the chair, tied to inflatable balls 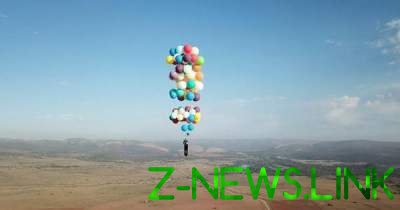 The British repeated the trick from the cartoon.

Briton Tom Morgan made an amazing journey in the vicinity of Johannesburg (South Africa). He flew 25 km on a folding chair tied to hundreds of helium balloons. The daredevil climbed to a height of 2 438 meters. He may have flown further, but for weather reports of strong winds in his way, Morgan had two hours to make a hasty landing, by turns piercing his balls, the inflation of which he spent before the flight for two days.

“The sky over South Africa filled with strange and wonderful creatures — from the giant vultures to tiny sunbirds. This time those who looked at the sky, expecting something even more unusual — the mad Brit on a chair tied to his balls for a party,” writes British newspaper the Mirror, noting that the spectacle is reminiscent of a scene from the famous cartoon “Up” animation Studio Pixar, where huge number of balls up in the sky house.

“This is truly an indescribable feeling when you’re carried by the wind over Africa, and you sit on a cheap chair, hanging with armfuls of balls,” said 38-year-old Tom.

Morgan, who manages the Bristol company, The Adventurists, organising extreme entertainment, said that his flight was a trial. In the future he wants to arrange in the Africa race on balloons. And now our own experience that it is quite possible.

“We weren’t even sure that Tom would come back alive. Didn’t think he could handle that. But, Yes, he did it in the end,” said one of the managers of the company Morgan Matthew Dickens.