John McAfee tried to kill himself in prison once already, Spanish newspaper claims 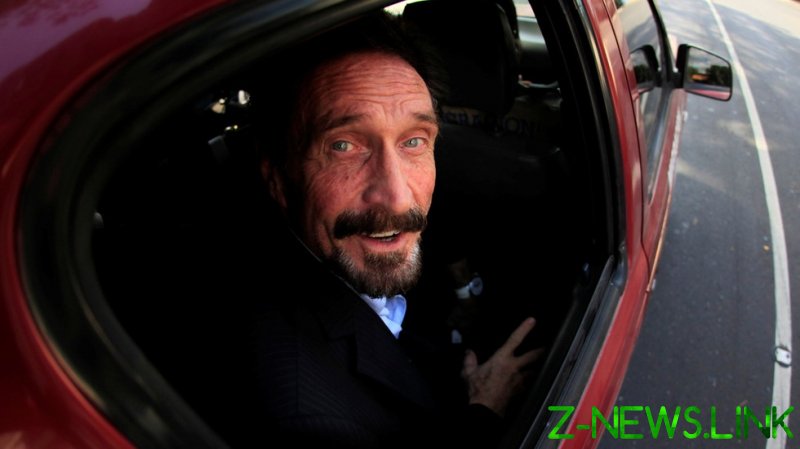 McAfee was found dead in his prison cell in Barcelona earlier this week, hours after a Spanish court approved his extradition to the US to face charges of tax evasion and other financial crimes. McAfee was reportedly found hanging, and Spain’s Ministry of Justice is treating his death as a suicide.

According to a report in La Vanguardia on Saturday, McAfee tried and failed to kill himself back in February, when he was housed in a different block of the Sant Esteve Sesrovires prison near Barcelona.

Citing “sources familiar with the incident,” La Vanguardia claimed that McAfee’s cellmate alerted guards after the businessman sliced his arms with knives he had concealed inside a book. McAfee was reportedly taken to hospital and treated for his injuries, but a psychiatrist later determined that his wounds were superficial, and didn’t represent a “real desire of the inmate to take his own life.”

McAfee was moved to another block of the prison shortly after the incident, where he died this week.

Citing confidentiality rules, the Ministry of Justice did not reveal any details of McAfee’s alleged suicide attempt in February to La Vanguardia. Likewise, his lawyer in Spain was unaware, as was his widow, Janice McAfee. According to the newspaper, the only reason such details would have been kept a secret would be if McAfee had requested so.

Janice McAfee has insisted that her husband did not commit suicide, and has blamed US authorities for his death. McAfee himself had repeatedly claimed throughout the years that he could be killed in prison and his death made look like a suicide. “Know that if I hang myself, a la Epstein, it will be no fault of mine,” he tweeted from behind bars last year, referencing the mysterious death of billionaire sex offender Jeffrey Epstein in a Manhattan jail a year before.

Accusing “US officials” of threatening him, McAfee declared in 2019, “If I suicide myself, I didn’t. I was whackd [sic].” Another interview clip from that year went viral on Friday after journalist Glenn Greenwald shared it. In the clip, McAfee said any suicide in his future would be fake and insisted he had a “dead-man’s switch” that would trigger the release of unidentified sensitive documents.

As internet sleuths pick through a lifetime of cryptic statements from McAfee, the official line on his death is still some time off. Authorities have said McAfee’s autopsy could take “days or weeks.” The late entrepreneur’s lawyer, Javier Villalba, said a second and independent autopsy has already been requested.