Home / WORLD / John McAfee arrested in Spain on tax evasion & crypto fraud, awaits extradition to US after months on the run

John McAfee arrested in Spain on tax evasion & crypto fraud, awaits extradition to US after months on the run 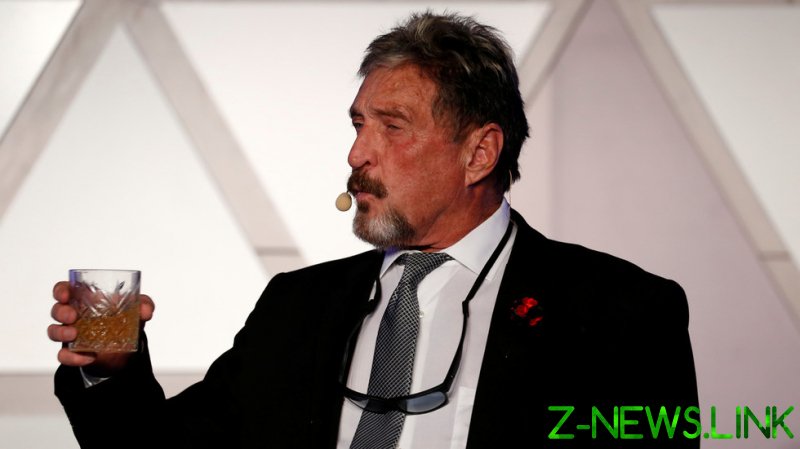 The US Department of Justice and Securities and Exchange Commission both announced charges for McAfee on Monday, hitting the security software founder with 10 counts linked to dodging the IRS and another series of charges for promoting investments in cryptocurrencies without disclosing that he was paid some $23 million to do so.

“John McAfee earned millions in income from promoting cryptocurrencies, consulting work, speaking engagements, and selling the rights to his life story for a documentary,” the DOJ said in a statement. “From 2014 to 2018, McAfee allegedly failed to file tax returns, despite receiving considerable income from these sources.”

McAfee was charged on five counts for willful failure to file a tax return, each of which carries a sentence of up to one year in prison, while the other five charges are linked to tax evasion itself, which could each result in up to five years behind bars. Originally filed in June, the newly unsealed indictment does not implicate McAfee’s former software company, which bears his name.

The SEC also accused McAfee of promoting “multiple [initial coin offerings] on Twitter” while “pretending to be impartial and independent even though he was paid more than $23 million in digital assets for the promotions.” The complaint also alleges that McAfee and his bodyguard, Jimmy Watson Jr., engaged in a separate scheme to promote cryptocurrencies on Twitter and then sell them off as their price rose. The government did not name the particular currencies in its complaint.

McAfee is said to have generated “an enormous amount of publicity” with “extravagant posts” online – singling out his promise to “eat my d**k on national television” if his forecasts for Bitcoin didn’t come true – which the SEC claims helped to pump up the value of specific cryptos that he then sold off.

“The SEC’s complaint… charges McAfee and Watson with violating antifraud provisions of the federal securities laws, McAfee with violating the anti-touting provisions, and Watson with aiding and abetting McAfee’s violations,” the commission said in a statement, adding that it also seeks to “bar McAfee from serving as a public company officer and director.”

The 73-year-old tech tycoon has not made a secret about being a wanted man, openly sharing his fugitive – and often eccentric – lifestyle with his Twitter followers while freely admitting to paying no taxes for the better part of a decade. He spent a brief time in custody in the Dominican Republic this summer after authorities discovered undeclared weapons aboard his yacht, but ‘went dark’ and moved to an undisclosed location after he was spotted in Iceland by an internet sleuth. Last week, however, he let slip in a tweet that he had traveled to Spain, where he joked (apparently) that he was checking on the “progress of the mud wrestling arena I’m building.”

While few details about McAfee’s arrest in Spain have been made known, he now awaits extradition proceedings there, according to the DOJ.