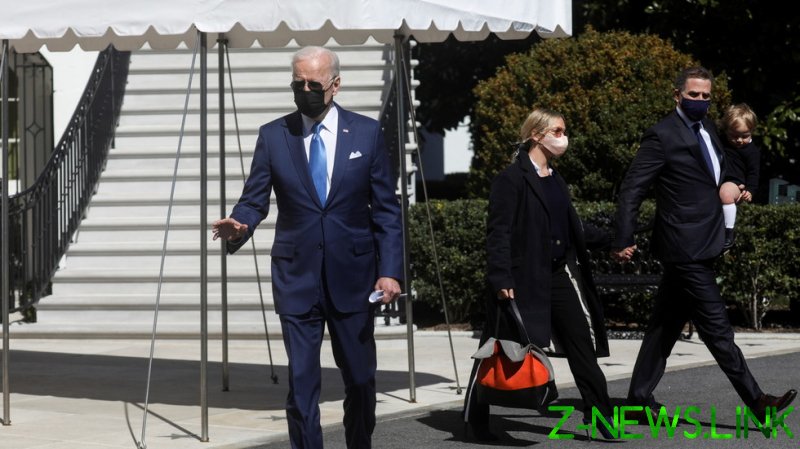 Letters from an abandoned laptop obtained by the Daily Mail show Hunter and business partner Eric Schwerin (both worked together on Rosemont Seneca) directly discussing Joe Biden’s finances, Schwerin fielding requests for a Biden book deal, and working on the then-vice president’s taxes, among other things.

There are also discussions mentioning Joe and Hunter Biden paying bills for each other and sharing bank accounts. With Hunter admitting in December that the FBI was investigating his taxes, this could lead to the president being dragged into the probe, according to legal experts who spoke to the Daily Mail about their findings.

The shared accounts also raise the question of whether the president’s finances while he was in office were used to help fuel Hunter Biden’s admitted week-long drug bender in Washington, DC in May 2018.

Text messages retrieved by the Daily Mail show a recently retired Secret Service agent, Robert Savage, texting Hunter during this binge while he was holed up in a DC hotel room and spending tens of thousands of dollars.

“Come on H this is linked to Celtic’s account,” one message reads, referring to more than $20,000 Hunter had just wired. ‘Celtic’ was reportedly the codename for Joe Biden. “DC is calling me every 10. Let me up or come down. I can’t help if you don’t let me H.”

While the messages do not directly link Joe Biden’s finances to his son’s escapades, they do raise the question of whether the agent was referring to the supposed shared bank accounts.

Other material from the laptop shows an image of Hunter smiling and pulling a woman’s hair, as well as emails adding fresh fuel to corruption allegations against the Bidens. In them, Schwerin asks Hunter to get his father to use his office multiple times to help business, including making introductions to “CEOs of major banks.”

Oddly, emails also show Schwerin taking on duties that would have typically been dealt with by the vice president’s own staff, including handling Biden’s Senate papers going to the University of Delaware. An aide to Senator Robert Menendez (D-New Jersey) also contacted Schwerin instead of Biden’s office to request the presence of the vice president at an event. Rosemont Seneca appeared to receive special treatment when it came to tickets to White House events, too, which they would use to meet potential clients, including 20 tickets for the White House Easter Egg Roll in 2010, and a dozen spots for a dinner during the same year.

Hunter Biden’s foreign business dealings came under heavy scrutiny during the 2020 presidential election, with a New York Post expose publishing numerous materials from a laptop allegedly abandoned by Hunter. The content included unsavory material from the now-president’s son, as well as communications that flew in the face of Joe Biden’s previous assertions that he had no knowledge of or relationship with his son’s business dealings.

The president had even said he never benefited from his son’s businesses, but the emails show Hunter complaining that half of his salary was going to paying his father’s bills while he was in office as vice president.

“It’s really hard. But don’t worry, unlike Pop, I won’t make you give me half your salary,” Hunter wrote in an alleged text message to his daughter, Naomi, apparently referencing Joe Biden.

He similarly complained in the alleged emails that his father was spending too much of his money.

Hunter Biden has acknowledged the laptop could be his, but both he and his father have denied any wrongdoing. However, this hasn’t stopped Hunter Biden from being the subject of controversy since his father took office, with a pricey ‘art show’ being the latest act to get critics’ and activists’ attention.

Asked about the art show this week – where paintings went for north of $70,000 – and whether the administration knew the identity of the buyers, White House Press Secretary Jen Psaki claimed they did not and said the president “remains proud of his son.”