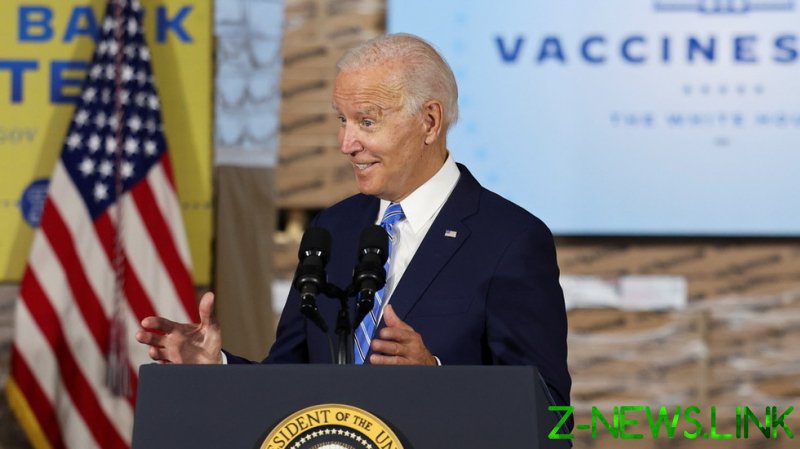 Biden touched down in Chicago on Thursday for a speech promoting his administration’s recently announced vaccine mandate for private companies, which would force employers to require that their workers either be vaccinated against Covid-19 or submit to regular testing. The speech, during which he linked his aggressive mandates to rising vaccination rates, took place at a construction site run by a company already implementing Biden’s proposed vaccine requirement, and owned by a Democratic megadonor.

The president, however, got off to a shaky start, thanking “Mister Mayor” Lori Lightfoot, who is actually a woman.

A few more names tripped Biden up, with the president “Robert Writer, re, reader, R-E-I-T-E-R, Reiter” receiving a shout out. Biden also seemed to confuse his TV with his phone during one anecdote.

“Last night I was on the television. On television. I was on… the… telephone with a person…” he recounted.

Biden continued touting the vaccine rollout during his half-hour speech, claiming that “the unvaccinated” are putting the US economy at risk and “overrunning” hospitals, both claims that would be disputed by his critics.

The US president has long been mocked for his propensity to stumble during his speeches and press conferences, and rumors of Biden’s declining mental faculties abounded during his 2020 campaign and first months in office – eagerly stoked by his Republican opponents.

Among Biden’s most memorable flubs were his botching of the Declaration of Independence (“We hold these truths to be self-evident, all men and women created by, you know, you know, the thing”), his insistence that 150 million Americans died from gun violence and another 120 million from Covid-19, and his creation of an entirely new word when he said he would “lead an effective strategy to mobilize trunalimunumaprzure.”

Though Biden’s gaffes are innumerable, his predecessor wasn’t above the occasional verbal slip-up, with Donald Trump once referring to Apple CEO Tim Cook as “Tim Apple” during a meeting in 2019.