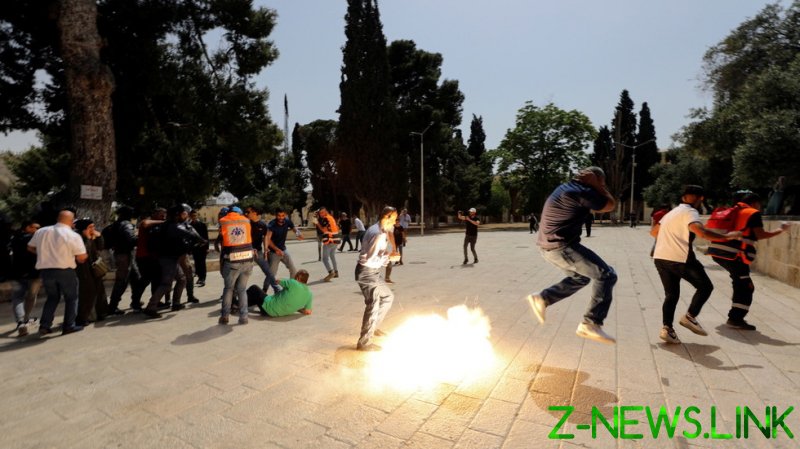 Back in mid-March, when tensions between Arabs and Jews spilled into clashes and riots all over Israel and particularly in the cities with mixed populations, a group of Jewish radicals congregated on Telegram. There, the group shared hate messages against Arab Israelis and Palestinians in a chat titled “Death to the Arabs, Afula Branch,” Israel’s Channel 12 reported on Sunday.

Most participants were apparently coming from the town of Afula located just north of the occupied West Bank. At some point, one of the chat members wrote that they “need to slaughter these Arabs today.”

The plot eventually morphed into a plan to attack a local bus stop frequented by Palestinians from the West Bank as they were traveling to their jobs. The chat members called on fellow participants to bring anything that can be used as a weapon to the bus stop when one of them came up with the idea of using Molotov cocktails to firebomb the place. The person behind the idea also complained he had only 30 bottles while arguing that they would need many more.

“We need to shake the country,” he wrote, adding later that the Molotov cocktails would be hidden somewhere in the field behind the bus stop. The would-be attackers were also apparently quite conscious about Covid-19 as they called on fellow chat members to wear masks to avoid catching the virus when slaughtering other people.

Fortunately, the plan never came to fruition, even though some of the extremists did arrive at the bus stop, according to the Times of Israel. Channel 12 reported that the whole scheme failed because the would-be attackers couldn’t find the Molotov cocktails one of them hid in advance.

However, a Channel 12 reporter Ohad Hemo allegedly managed to find what appeared to be the very same stash filled with bottles, some of which had rags in their openings. The bottles smelled of gasoline, he said.

Channel 12 also said that the planned attack was reported to the police some two weeks ago but the bottles were still in place when the journalists found them not so long ago. The police then told Channel 12 that they investigated the case and a “similar” incident and arrested nine people. Four of those detained reportedly had weapons in their possession.

Yet, all those detained have apparently since been released, according to the media while the police provided no further comments on their fate. The identities of the would-be attackers were also not revealed by the media.

According to some reports, some chat members might have had links to the extreme-right Lehava organization. Lehava, in turn, is considered a part of the NGO, the Foundation to save the People of Israel. The news prompted an Israeli MP, Omer Barlev, to demand the NGO be dismantled, forcing its head to state that the group in Afula had nothing to do with his organization.

The news came as the Israeli prosecutors charged four Jews with terrorism after they stabbed an Arab man at a Jerusalem market two weeks ago. The victim was working at a burger restaurant at the market when the suspects attacked him and stabbed him 10 times.

The man was rushed to hospital, and has now been discharged. The police prohibited revealing the attackers’ identities, the Times of Israel reported. Their lawyer, however, told Ynet that his clients were “interrogated under very difficult conditions by Shin Bet interrogators,” adding their account of the events is “radically different” from that of the stabbing victim’s and called on the people not to “rush to draw conclusions.”

Israel saw massive riots and clashes between Jews, Arab Israelis and Palestinians earlier this month sparked by an Israeli court case over the eviction of several Palestinian families from a Jerusalem neighborhood.

The tensions spilled over into a violent conflict between Israel and Hamas militants in Gaza that saw the Palestinian group launching rocket attacks at Israel with the Israel Defense Forces responding with massive airstrikes against Gaza. The hostilities ended in a ceasefire last week.

The Israeli Justice Ministry also announced last Sunday that it had so far filed 140 indictments against around 230 people in relation to the clashes and rioting earlier this month. The ministry didn’t reveal the nationalities of the suspects, but the Jerusalem Post reported that only around 20 of them were Jews while the majority were Arabs.