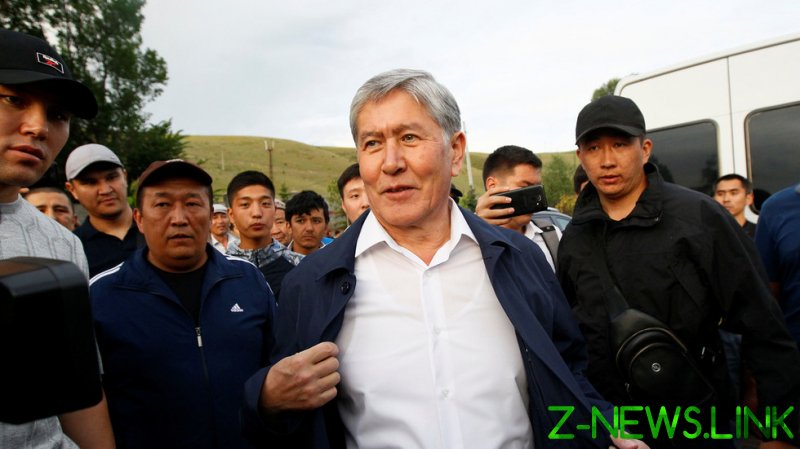 Atambayev was released around 4:30 am local time on Tuesday by protesters who had taken the jail, RIA Novosti reported from the Kyrgyz capital. Earlier, his son Kadyr was at the head of the crowd that stormed the White House, the compound that houses the presidential offices and the Kyrgyz parliament.

He was expected to join the crowd camping out in Bishkek’s Ala-Too Square, calling for the cancellation of the weekend’s parliamentary election.

Demonstrators took to the streets of Bishkek on Monday, denouncing the election as fraudulent and accusing President Sooronbay Jeenbekov of vote-buying and intimidation.

According to official results, only four parties out of 16 in the running had cleared the threshold to enter the country’s parliament. The highest number of votes went to Birimdik (Unity), the party of the president’s younger brother Asylbek.

Jeenbekov came to power in 2017 as Atambayev’s chosen successor, but quickly fell out with his mentor. Atambayev was arrested in August 2019 after a bloody raid on his estate in the village of Koi-Tash resulted in the death of one security officer. He was sentenced a year later to 11 years in prison for corruption, and was in jail pending trial on charges stemming from the raid.

Kyrgyzstan is a Central Asian state that gained independence in 1991, after the dissolution of the Soviet Union. Monday’s unrest is the third time since 2005 that protesters have demanded regime change in the streets. Its first president, Askar Akayev, was ousted in the ‘Tulip Revolution’ after almost 15 years in power. His successor Kurmanbek Bakiyev fled the country five years later.

Roza Otunbayeva, Kyrgyzstan’s first female president, took over from Bakiyev in April 2010, but was barred from running in the 2011 election.