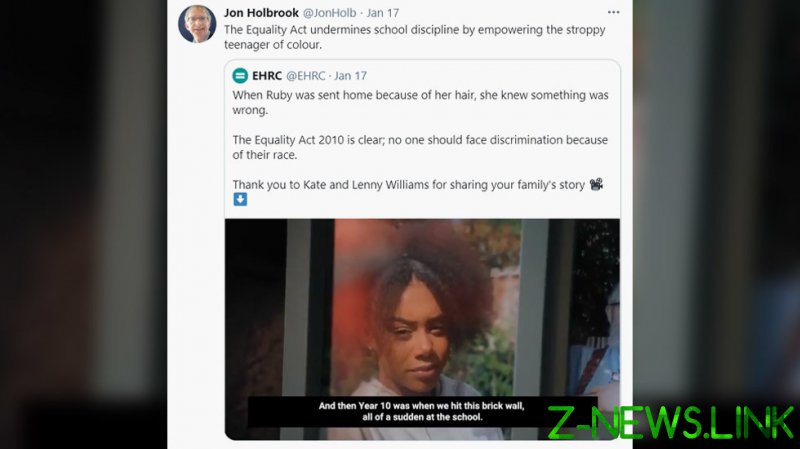 I have been expelled from my barristers’ chambers because of a tweet. During my 15 years as a barrister at Cornerstone Barristers and 30 years at the bar, I had an unblemished professional record and was top ranked by legal directories for my work – particularly in public law. And yet my one-sentence tweet on a platform designed to be polemical has ended this particular career.

The offending tweet was a response to a promotional video from the Equality and Human Rights Commission that featured the parents of former schoolgirl, Ruby Williams, who had challenged her school’s uniform policy. The video claimed this was a case of racial discrimination and hence that the policy had been rightly outlawed. I challenged that conclusion with a counter-narrative by stating: “The Equality Act undermines school discipline by empowering the stroppy teenager of colour.” In other words, I did not view this as a case of racism by the school. I saw it as a challenge to school discipline by a child and her parents who were seeking a dispensation on racial grounds.

The impugned school uniform policy required “Afro-style hair, including buns, to be of a reasonable size and length.” A policy premised on reasonableness should not be outlawed as discriminatory. The implication is that a lawful school policy should allow Afro-style hair to be of unreasonable size and length. Moreover, school policies should be complied with by children and their parents. But Ruby did not comply and was accordingly sent home on several occasions because her hair was “too big.” As my tweet claimed, the case highlighted how “the Equality Act undermines school discipline by empowering the stroppy teenager of colour.”

The Twitterati demand my head

Five days after I posted the tweet, a Twitterati of bien pensants organised a pile-in. Twitter investigated and concluded that my tweet “is not subject to removal under the Twitter Rules or German law.” Undeterred by this finding, the Twitterati pressed on with the clear intention of giving me the choice of being either silenced or driven out of Cornerstone. Several implied I had no place at the bar; one wondered why I “feel safe… tweeting something like this.” Shadow Justice Secretary David Lammy MP posted: “You shame the Bar.”

I responded – not on Twitter – but with a reasoned essay that put the Ruby Williams case in its proper context by considering several school uniform court cases dating back to 1982. This online essay on Conservative Woman argued that school uniform policies should not be required by law to accommodate cultural sensitivities. It argued that schools should be able to set their own policies without legal constraint because headteachers and governors know best how to address community needs.

The article noted how a primary school in Newham, east London had “decided to tackle the problem of multiculturalism with a 2016 policy that outlawed the hijab for girls under eight.” The policy was introduced after the headmistress noted how very few of her schoolchildren thought they were British because they identified as Indian or Pakistani.

Those who challenge the woke agenda are likely to be pilloried on Twitter: a forum with a preponderance of the like-minded clerisy. This clerisy did it in my case with two gross errors and one omission. First, it claimed I had attacked a vulnerable girl. But by failing to comply with a school uniform policy that merely required her hair to be of “reasonable size and length,” the description of Ruby as a “stroppy teenager” was apt. Nobody has suggested that the schoolgirl had parents who were so controlling as to deprive her of a description that gave her agency. Furthermore, the girl never sought anonymity – unusual in court cases involving children – which was probably because she wanted to speak publicly about the case, which she did. Moreover, she is now 19 years of age and able to defend her stance.

Secondly, the Twitterati claimed that describing the “stroppy teenager” as being “of colour” was racist. But Ruby won her case because she was “of colour.” Without making a reference to the girl’s race, the tweet would have made no sense. To use the language of the Equality Act: Ruby had a “protected characteristic” (her race) which was the basis on which her legal challenge was brought and succeeded.

Thirdly, my detractors failed to engage with the point I made. Many on Twitter, especially lawyers, will salivate over any video that celebrates cultural diversity and the equality discourse. But they cannot cope with critics who, like the headmistress at the Newham school and the other headteachers quoted in my essay, can see that cultural diversity can be damaging when not tempered by the importance of cultural assimilation.

Furthermore, as my essay explains, the “equality” discourse is a misnomer because it operates by treating some (those with protected characteristics) more favourably than others. These are issues that the woke left cannot engage with and so they seek instead to silence any criticism with their weapon of choice: cancel culture.

Cancel culture is invariably ad hominem. If a person is “racist,” he is too vile to be listened to. Some people fit that description, but by applying this stigma to me – a person keen to challenge racial differences – my critics have deluded themselves in order to run away from a debate. In my case, the ad hominem charge of “racist” was allied to the notion that I was too disreputable to continue practising as a barrister.

A straitjacket on the free expression of ideas

This raises an interesting point. Has society become so intolerant towards those who challenge the woke agenda that it is no longer possible to counter this political discourse while practising as a barrister (or any sort of professional)? Over the last few years, the woke have reported several of my tweets to my professional regulator, the Bar Standards Board (BSB), and in one recent case that I did for Brighton Council, I was sacked immediately after winning it when a Guardian journalist asked the Council to look at my Twitter timeline.

So far, the BSB has never contacted me and I assume that it recognises the importance of my right to speak freely. But if it were to bend the knee before the woke, then it would cement the view that barristers must either be Guardian-reading liberals or must resolve never to speak publicly of their own opinions.

Four days before my expulsion, I resigned, having concluded that I no longer wanted to practice as a full-time barrister. The attempted cancellation prompted the manner and timing of my resignation, but it was not the underlying cause. The only reason that Chambers proceeded to expel me, despite my resignation, was because the salivating attack dogs wanted some red meat to chew. Chambers was compliant enough to jump to their barking but it made no difference to me – save to enhance my reputation as a free speech advocate.

Society needs an honest discussion about the pernicious cancel culture that can be deployed against anyone who expresses conservative and populist ideas. I was in a privileged position. I was self-employed; had I been employed I would probably have been fired years ago. As a professional advocate, I have a better chance of navigating the tripwires laid by the woke to ensnare their prey.

Also, without work I will not be without food or shelter. Because most citizens are not able to tick these boxes, cancel culture is a straitjacket on the free expression of ideas. A democracy cannot function when the protagonists can speak freely whilst the antagonists are muzzled.

The woke may think they are lovely people who just want us all to be nice to one another. But they are not lovely people, as my targeting shows: they are intolerant proselytisers who want to silence those who challenge them. They seek to deploy, not the jackboot of totalitarianism, but the cancel culture of intolerance. In the name of democracy, they must not succeed.