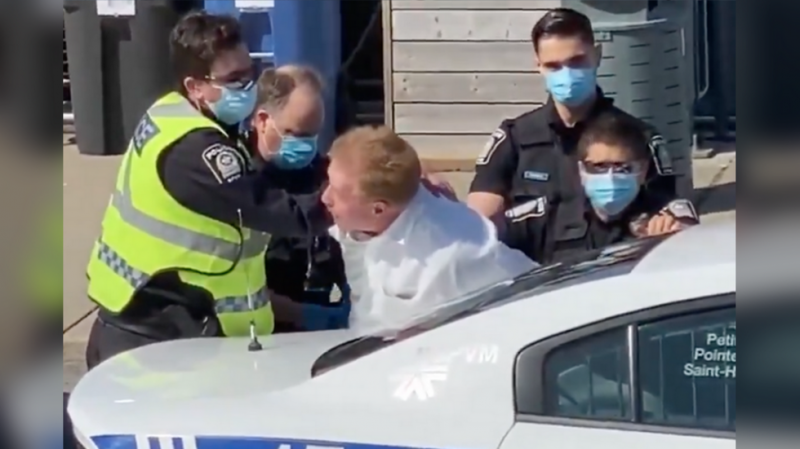 In one video posted to Twitter on Saturday, Rebel News reporter David Menzies can be seen having a tense exchange with police officers, which eventually leads to him being hauled away and detained.

Another reporter for the outlet, Keene Bexte, tweeted that he had also been arrested.

Rebel News co-founder Ezra Levant promised he would be suing the officers for their conduct and in another video can be seen taking down one officer’s name.

According to a statement from the Canadian outlet, police arrived at an Airbnb where Rebel News journalists were staying to cover anti-lockdown protests and Covid-19-related arrests and forced everyone out and conducted a “room to room” search.

“When we asked them what the ‘crime’ was, all they could come up with was that our staying in the hotel was an illegal ‘gathering,’ contrary to Quebec’s lockdown laws,” they said.

The outlet added that they were staying in a “registered, legal hotel rental on Airbnb” and fewer guests than the place was built for.

Levant claims the outlet’s unflattering reporting on Montreal police and their enforcement of Covid-19 restrictions is what prompted the visit and search of the houseboat being utilized by the reporters.

“This is their revenge,” he said. “Because we report on their misconduct.”

Levant is already fundraising to support his lawsuit against police, alleging the search and arrests were unjustified and claiming officers have repeatedly harassed Rebel News reporters in recent weeks and made bigoted remarks.

The reaction to the arrests has been mixed at best. While many have expressed shock at the police behavior and allegations from Rebel News on social media, others have simply used the opportunity to blast the highly-controversial outlet, which is often dismissed in mainstream media as a “far-right” enterprise pushing misinformation.

Montreal on Saturday saw a mass protest against the strict Covid-19 measures recently imposed by the authorities in Quebec. An 8pm curfew has been reintroduced in the city, while all the non-essential businesses and schools have been told to shut down until at least April 19. According to the independent news outlet Westphalian Times, the organizers of the protest march sought to highlight the “negative impacts restrictions in schools have on the well-being & development of children.”