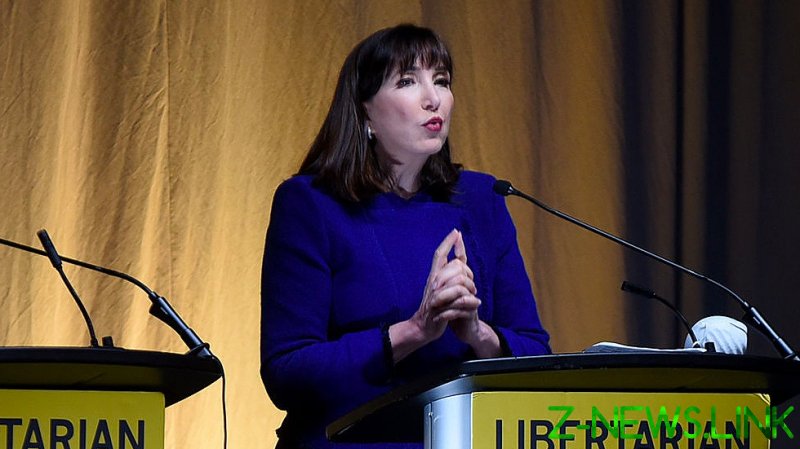 The Libertarian Party leader has been targeted by angry Americans, who blame her for deciding who the next president will be. Dr Jo Jorgensen received 1.76 million votes, but it was where they were cast that proved vital.

Across Georgia, Arizona, Pennsylvania and Wisconsin; her ballots were far greater than the gaps between Biden and Trump. For example, in Georgia the difference between the two is 14,149, but Jorgensen won 62,060 votes in the state. These Americans seemingly supported her vision of turning the US into a “giant Switzerland”.

Speaking exclusively to RT – she said: “I have had some nasty emails saying I threw the race and I’ve ruined the entire country. And then they say, I hope your ego is satisfied and that I did it because of my ego as I knew I was never going to win. There is always the hope, but I knew I wasn’t going to win – but I didn’t do it for my ego. If you watch back my campaign, you’ll see that.”

“I even got a voicemail from this woman, it was nothing but four letter words. She was calling me things and oh my gosh, it was awful. I think she was a Republican who felt if it hadn’t been for me then Trump would be president.”

The Libertarian Party conducted a professional campaign and their influence on the result is plainly a byproduct of a functioning democracy. The voters they did attract, clearly couldn’t vote for someone else – so it did impact on the other candidates. Across the four key states, there were 57 electoral college votes available. Trump could have held the White House if he’d taken Jorgensen ballots, and Libertarians are far closer aligned to Republican values than Democrat ideals.

She explained: “I can tell you historically we tend to draw voters from both sides. This time around, I don’t know if it was one or the other so far. If I can change the landscape of American politics for the better, I’ll be happy as that’s why I am doing this. I would suggest the reason Trump is not president is because of Trump, he didn’t follow through.”

“He increased the deficit faster than Obama and that was before the pandemic. If he had come in and cut the deficit like he said he would, I think he would have won in a landslide but he didn’t follow through on those promises. That poor misguided woman who called me all those names, I don’t think she realises that in the long run it is hopeful that people like me are running, because maybe politicians will straighten up their act.”

Being closely connected to American public opinion, Dr Jo feels Trump threw it away rather than Biden winning.

She added: “Donald Trump said he was an outsider, a businessman and that he was going to balance the budget and cut the deficit. He didn’t do any of that. I think if he had, he could have won. It might make Republicans say, ‘you know what, maybe they really do want us to cut the deficit and we better start doing that or we’re going to have another Libertarian come along and take our votes’.”

Dr Jo also had some insights on Trump’s refusal to concede. The president appears to still be contesting the result even though all major platforms have named Biden as President-elect. Dr Jo said: “There were a few small cases of irregularities, so I guess I can’t hold it against him. I’m not as bothered as most people, I don’t think it’s going to make a difference. If those stories are true and they seem to be, I can see why he’s saying ‘wait a minute’. But the chances there are that many irregularities and that many dead people voting to make a difference is probably not going to happen.”

While their impact in the four key states has garnered attention, it doesn’t mean The Libertarians are all celebrating. It was their second most successful ever election, since the party formed in 1971. Former leader Gary Johnson won 4.5 million votes in 2016, but he was a former governor of New Mexico and ran alongside another ex-governor (Massachusetts) Bill Weld.

Dr Jo said: “I beat Gary’s first run (2012) and Bob Barr’s run (2008) and they were both well-known Republicans who had made a name for themselves, so the fact that I beat them is good news.

“A few people had asked me what my definition of success was and I said my real definition would be to beat Gary’s second run. But I would not have been successful if I didn’t at least beat his first run. It was a lot of fun and I’m glad I did it.”

Still it could have been a lot more. Despite being on the ballot in all 50 states plus the District of Columbia, The Libertarians were not included in TV debates. They also suffered from very little mainstream media coverage in America.

Dr Jo said: “There were still so many people this time who didn’t know they had a choice other than Trump or Biden. I keep hearing reports going to the ballot saying: “wait a minute, there is somebody else here? People tell me their friends didn’t know I was running and saw my name, and thought I was a guy – they were asking, “Who’s Jo? Who is he?”

Seemingly with the wind at her back, it may come as a surprise that Dr Jo has doubts about battling on until 2024. She had planned to run but anticipates some Libertarians may edge her out.

Dr Jo admitted: “I had planned on running but now I’m not sure. I am going to keep the movement going. I don’t want things to die out and then we don’t hear from Libertarians for the next year. I want to keep those people excited and interested in the movement, so we can build on it next time. But a lot of people think perhaps Justin Amash the Republican might run. There are Libertarians who say he has name recognition. Actually right now, I probably have more name recognition than he has but some Libertarians are clinging to the fact if we had a well-known Republican, people would treat us more seriously. I’ve never held office, but Justin Amash can at least say he was a congressman and so is a serious candidate.

“In other words, he is a politician and I’m not. I’m really not doing this for my ego because if I had a big ego, I wouldn’t be talking like this.”