Home / WORLD / It’s a load of maskless balls: authoritarian elites party on regardless while ordering us to follow their Covid rules

It’s a load of maskless balls: authoritarian elites party on regardless while ordering us to follow their Covid rules 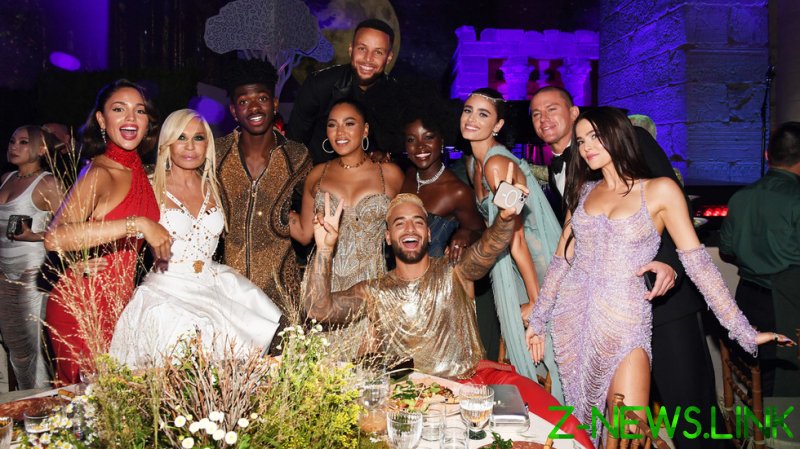 Extravagant events staged as social media spectacles in America have taken a page out of the failed Roman Empire’s playbook on diversion and distraction of the masses. Please welcome globalism 2.0, the bread-and-circuses acts designed to shift the narrative away from the uncomfortable truth of a collapsing regime.

Social media is the tool being used to shape, design and control us, both as individuals and via the societies we live in. Facebook, Twitter, Google, LinkedIn, YouTube, Apple, and Amazon have sophisticated surveillance tools and algorithms designed to ‘censor’ opposing viewpoints, and will no doubt shortly implement social credit scoring that will be enforced by mob rule and a rabid cancel culture.

Societal elites, politicians, and a servile mainstream media have launched a divisive class war, imposing mask mandates and vaccine passports on the masses, yet ignoring these rules as they please. They appear to grant us access to free and fair elections, and a ‘choice’ between red or blue, but no matter which option we pick, it produces the same outcome, and the puppeteers empty our pockets from behind a curtain.

The liberal left shriek about equality, equity, and social justice while embracing a culture that enables a class system of indentured servitude in which the badly paid workers who serve the elites their exotic foods and French champagne must wear masks, yet the same rules don’t apply to those who created them. Epic hypocrisy – one rule for thee, another for me.

The UK and US governments and their media partners deploy gaslighting, lies, propaganda, and fear to control us. Their mantra: a fearful public is a submissive, obedient, and compliant public. These campaigns include the bait-and-switch BS employed by British PM Boris Johnson, as he makes promise after promise only to discard each one: on no vaccine passports, on no new taxes, on the hiring of more nurses and police. Just read the fictional Tory manifesto comparing the promises made to the realities delivered.

And the same lies are repeated each election cycle – we must all be suffering from Stockholm syndrome to fall for them. Die-hard Tory apologists insist ‘circumstances changed’ with Covid, so taxes have to go up. Sorry, but Covid does not explain the Conservative Party’s fiscal profligacy over the personal protective equipment scandal, the not-fit-for-purpose £40 billion ($55 billion) NHS’s coronavirus Test and Trace disgrace, the High Speed 2 rail track to nowhere that is £70 billion ($96 billion) over its original budget, or all the other non-tendered deals tossed to Tory donors that made them fat, prosperous, and happy while the tax-paying plebs got screwed – again.

And who better illustrates this new authoritarianism than Nadhim Zahawi – until this week’s Cabinet reshuffle the UK’s vaccines minister? Two days ago, he announced that children as young as 12 will be able to overrule their parent’s objections to their receiving a Covid-19 jab, allowing them to participate in what is essentially a medical experiment. No long-term data exists that supports the safety, efficacy, or necessity of a coronavirus vaccine for children. Parents should be outraged by the Tories’ forced medical tyranny and never again vote for them.

Across the pond, US President Joe Biden’s dishonesty is extraordinary. At his inauguration, he promised to provide “truth” and “unity” and to honor the US Constitution. How’s that going? Among his whoppers was this promise: “I don’t think Covid vaccines should be mandatory,” and that he wouldn’t be imposing a mask mandate. Until he did.

Biden’s recent Covid vaccine dictate, declaring“war on the unvaccinated,” had him bizarrely bellowing, “This is not about freedom.” That’s one of the few times he’s been right.

In his infrequent public appearances, the president is sometimes visibly disorientated, occasionally confused, and often unable to read a teleprompter. He has even admitted he is “not supposed” to answer questions. Something is very wrong. So, why is the liberal mainstream media covering these things up?

Biden also promised not to leave Americans behind when he exited Afghanistan without any plan. That, too, was a lie and a total disaster. The withdrawal illustrated a complete lack of leadership by feckless cowards who turned their backs on US citizens, allies, and the Afghans who helped America’s War on Terror for 20 years.

His ill-thought-out and badly executed orders resulted in hundreds of deaths and a mass hostage situation, and gifted the Taliban with a lot of hi-tech military equipment. The consequences and international blowback of this failed exit will last for decades. Little wonder Senator James Risch (R-ID) demanded that Secretary of State Antony Blinken disclose who really “is in charge at the White House.”  The US Army’s Joint Chief of Staff General Mark Milley’s recent declaration that “we’re the guys with the guns” shows the US is run by unaccountable, unelected civilians dressed up in military gear.

Yet, never mind disasters such as Covid, Afghanistan, and all that, the party must go on for the elites. Their bread-and-circuses events divert, distract, and entertain the masses. These range from this week’s obscene Met Gala to other mask-free events such as California Governor Gavin Newsome’s lavish French Laundry $2,500-a-head dinner, Speaker ‘Fancy Nancy’ Pelosi’s fundraisers, and Obama’s 60th-birthday party.

Back in Britain, there’s the extra-marital affair engaged in respectively by Neil Ferguson, the scientist who started all the coronavirus madness, and by then-Health Minister Matt Hancock, each, in the name of love, brazenly violating the rules they created and imposed on the public. At the same time, the economy is being plundered, books burned, history rewritten, and cultural values, norms, and the concept of a nuclear family destroyed. And all the while, politicians become obscenely wealthy.

Governments are not following science, they are corrupting it, and placing politics and profits before people’s lives. No leader or administration can be trusted unless they practice transparency and accountability. Yet the UK government wants to jail journalists for reporting public corruption that embarrasses those in power.

The imposition of crippling measures on the economy have led to widespread business closures. Lockdowns, and mask and vaccine mandates, are not simply about public health, but, rather, are a power grab for political control, designed to instil fear and make the little man dependent on “big government.” The mantra of “Build Back Better” is, in reality, cover for a dystopian revolution. Together we must resist all of these authoritarian dictates before it’s too late.