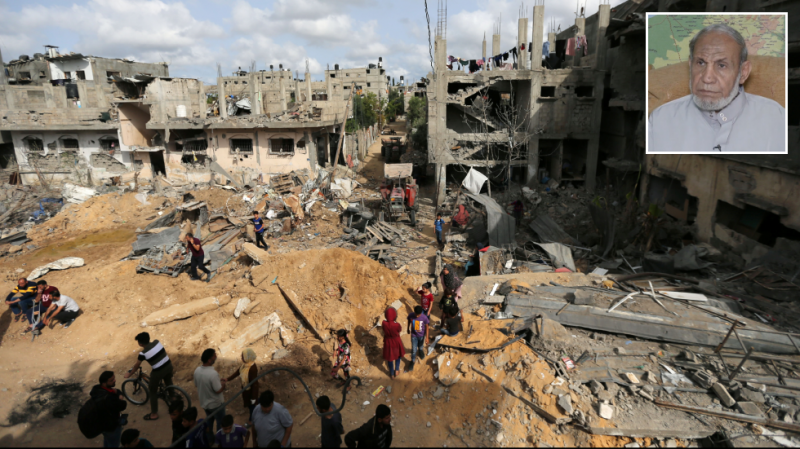 In May, the Israeli military and Gaza’s armed groups engaged in 11 days of brutal warfare, resulting in the deaths of 270 Palestinians and 13 Israelis. Since then a mutual ceasefire has largely held, but many speculate that this may soon change. In order to get a better grasp of the ongoing tensions between the two sides, I spoke to Mahmoud al-Zahar, the co-founder of the Hamas movement, to get the perspective of the organisation currently designated as a terrorist group in most Western capitals.

Born near Gaza City on May 6, 1945, making him, at 76, older than the state of Israel, Mahmoud al-Zahar is known as many different things to different people. To some he is a co-founder of an armed liberation movement, to others he is known as an international terrorist leader and conservative Islamist. He previously served as the Palestinian foreign minister as part of the democratically elected Palestinian Authority (PA) government of 2006 following a landslide victory for Hamas at Palestine’s legislative elections. In 1988, one year after the launch of Hamas, he was detained by the Israeli authorities and was later, in 1992, exiled to southern Lebanon. He has survived multiple assassination attempts and currently resides inside besieged Gaza, where he remains a high-profile leader of the Hamas organisation.

Al-Zahar currently has a target on his head, meaning that any time he could be assassinated by Israeli airstrikes, as they view him as a major terrorist leader. When I spoke to him over a live link from London, he told me that the building which he was speaking from had been bombed four times.

One of the primary issues I asked him about was that of the ongoing prisoner swap talks, which are being carried out through Egypt acting as intermediary. Hamas currently holds four Israeli soldiers captive: Hisham al-Sayed, Avner Mengistu, Hadar Goldin and Oron Shaul. It is unclear whether they are alive or dead, but according to Hamas they will only be handed back to Israel under an prisoner exchange agreement, similar to the 2011 deal struck between the two sides, under which 1,027 Palestinian prisoners were freed for the release of one Israeli soldier.

I asked al-Zahar what were the primary considerations for Hamas and what would constitute a fair prisoner exchange deal in its eyes?

Calling the swap as being based on “humanitarian principles,” he replied:  “We hold to the principles that we should release the old age prisoners, the people that suffer from chronic diseases, people representing every area in Palestine, not only in Gaza Strip but also the West Bank… The aim is to set free prisoners in urgent need for freedom, in order to save their lives, in order to treat them…and to also allow people to continue their activities [work] in order to help their families.”

When asked how his organisation would respond to the capture and detainment of the four Israeli soldiers as being labelled as an act of terrorism and criminal in nature, he stated:

“They came and occupied our land, it was a very disastrous step for Europe and America in particular to put foreigners in our land to dismiss our people, to allow them [Palestinians] to live in refugee camps, without any reason, without any crime [being committed by Palestinians]. Just because they are Jews, as a Holy people, and our people as the owners of the land have no chance to live in our lands, so for this reason I think it is a fabricated story that we are criminals, that we are terrorists – we are very simply freedom fighters to liberate our land…”

Previously it had been claimed that imprisoned Fatah Party leader Marwan Barghouti was the top priority in any prisoner swap and al-Zahar confirmed that this was true, explaining:  “We are not differentiating between the Palestinian factions…the last release included a lot of people, not all of them from one side [politically]. We put down our values of who should be released, as I told you, old age, people with chronic diseases, [from] every area, every faction, every organisation and especially the people who are in urgent need to be set free – one of them [is] Marwan Barghouti.”

I wanted to know what he makes of the framing, in much of the Western media, that May’s war was orchestrated by Hamas in order to achieve its own aims, without considering the goals of the wider Palestinian society. “It was not Hamas, it was every organisation, everybody, every family,” he explained, blaming the conflict on Israel’s attacks on Palestinian worshippers at the al-Aqsa Mosque in Jerusalem, which incited people to revolt. “They [Israel] violated their rights to go and to pray, to celebrate and to do the Islamic tradition, in this important third [holiest] shrine in Islam, after Mecca and Madina.”

Al-Zahar also opened up about the Israeli killings of his own children, saying that he saw the remains of one of their bodies after a tank shelling. “I personally lost two of my sons,” he revealed. “One, called Khaled, after one week coming back from Europe, he got a masters degree from Salford University [in Manchester, UK], they killed him in this house and they killed my last son called Hussam, they killed him by tank bomb.” The seriousness with which his tone altered, when explaining this, gave a great indication of the conviction he has to the struggle of the Hamas movement against the Israelis, it was easy to tell that despite such personal sacrifices, his mentality has not faltered; in fact, it seemed as if his losses only solidified his views.

After having travelled to the occupied territories, speaking to and interviewing countless ex-prisoners who had suffered from torture and families who had lost loved ones, I noticed a very similar tone is often taken, one of unwavering belief in their cause. Often these sort of tragic events, if they don’t manage to completely devastate and demoralise people, work only to further tighten their belief in the Palestinian national struggle.

When pressed on the reason behind his group using violence to achieve its goals, he replied strongly: “The principle in any country, the principle in even the animal…is that it is self-defence…[Benjamin] Netanyahu, still his father is still living in America, [Avigdor] Lieberman, his father is still living in Russia, what justifies for these people to come from every area to occupy our land and to consider it Israel? We are the real owners of this land for centuries and centuries.”

“Just give me one example in history, in any country, in any area, in any era, that people that suffered from occupation allowed the occupier to continue their existence in their land?”

Everybody is looking for freedom, every country that suffered from the occupation…they had the right to defend themselves against occupation.”

Asked to comment on recent tensions inside Israeli military prisons, with claims of human rights abuses against detainees, he asked, “What does international law have to say about this?” and blamed Europeans for their silence on the issue.

Al-Zahar told me that in order for there to be a long-term truce with Israel, Tel Aviv must allow Palestinians in the West Bank and Gaza freedom of movement and basic rights and end its siege of Gaza, which has been in place since 2007. At no point did he indicate that his organisation would step aside and agree to a long-term ceasefire, or end their armed struggle against the Israelis, unless these demands were met, commenting firmly on the resolve of the group: “We have to defend our land, to defend our people, to allow our generations to live as human beings in the future.”