Home / WORLD / ‘It’s a hustle’: Elon Musk DESTROYS Dogecoin as he brings crypto memes to his episode of SNL

‘It’s a hustle’: Elon Musk DESTROYS Dogecoin as he brings crypto memes to his episode of SNL 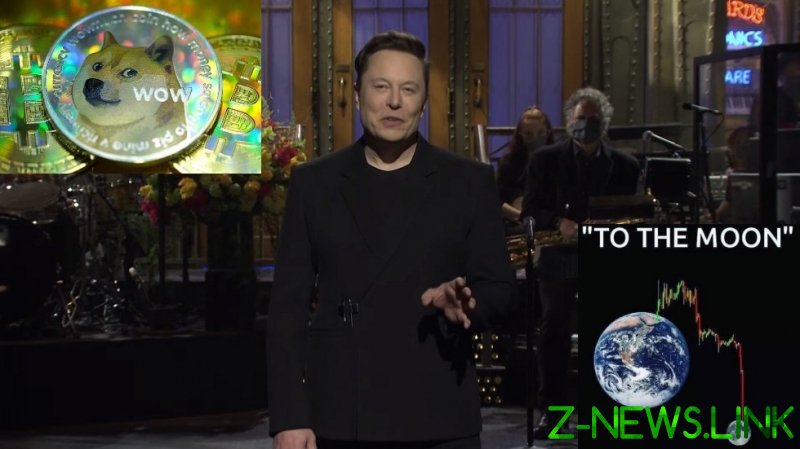 It was Musk’s mother Maye who name-dropped Dogecoin in the opening skit, saying she hoped it wouldn’t be her Mother’s Day gift.

“It sure is,” replied the SpaceX and Tesla founder.

Musk then made an appearance on the ‘Weekend Update’ segment as a financial analyst calling himself the “Dogefather,” hyping the cryptocurrency before agreeing with the cast members that “it’s a hustle.”

After going up slightly as the comedy show went live, the price of Dogecoin – a meme cryptocurrency with an estimated capitalization of $90 billion by now – went into free fall. It was down by almost 27%, going from 66 cents to 50 cents, in the space of an hour.

It had regained some ground by the episode’s closing, going back to around 55 cents.

The eccentric billionaire may have actually tried to warn everyone, introducing himself as “the first person with Asperger’s to host SNL… or at least the first to admit it,” and joked that he was “pretty good at running ‘human’ in emulation mode.”

The live sketch comedy and variety show has been around since 1975 and once spun off such cult comedy films as ‘Blues Brothers’ and ‘Wayne’s World,’ but its popularity – and ability to reach Americans beyond the liberal coastal bubbles – has faded in recent years.

While some have panned the episode, others chose to view Musk’s act as subversive, showing “MILLIONS of young Americans… how disconnected and tone-deaf the coastal elite are.”

“If you’re not a raging leftist – they think you’re a joke,” tweeted conservative writer Bradley Brewer. “Elon showed us all who they are – again.”