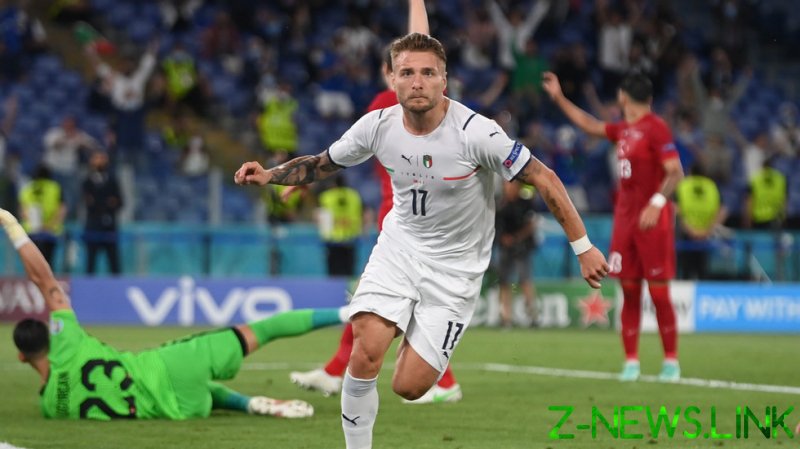 Honoring the late, great Luciano Pavarotti at Italia ’90, Andrea Bocelli got the postponed tournament off to a flying start by bellowing out Nessun Dorma before kick off to fireworks.

His passion was matched by both teams’ hearty renditions of their national anthems, with the Italians as always screaming theirs by the end.

Though the first half finished goalless, Italy threatened to break through and then netted three in an action-packed second half that stated their credentials under Roberto Mancini and extended a 28-game unbeaten run.

Furthermore, this was the first time they had scored more than two goals in a European championship match.

The match ball delivered by a small remote-controlled car, the action finally got away with Italy enjoying control of possession and the first good chance of note when Domenico Berardi managed to keep the ball in play and cut back for Ciro Immobile to hit wide inside three minutes.

Insigne was menacing down the left side of attack but like the rest of his Azzurri team – playing in its away kit despite being at home – found it hard to break down a solid defensive line led by Leicester star Caglar Soyuncu.

Running out at his home stadium, Roma’s Leonardo Spinazzola tried his luck down the same flank with his crosses headed out by a Turkey outfit that got behind the ball in numbers. Yet on 17 minutes, he had a handball penalty appeal turned down.

As Italy maintained a nice tempo, Insigne was played into the box by Berardi but couldn’t bend his curving shot round enough to get one on target.

When Immobile was scolded by the referee for protesting too much when a shot was accidentally handled, the resulting corner saw veteran warhorse Giorgio Chiellini have a free header tipped over the bar by Ugurcan Cakir. Later, Immobile also headed just wide too and it felt like Italy could be close.

Then, though, Turkey, with the youngest squad in the tournament, forced Gianluigi Donnarumma to finally do something when palming out a ball from captain Burak Yilmaz attempting to cross the AC Milan keeper’s area.

As Immobile twisted and turned in the box but hit a chance straight at Cakir, tensions rose through a restless crowd as a Spinazzola delivery was again batted down with hands, checked by VAR, but turned down as half time was called.

Missing their main playmaker Marco Verratti to pull the strings alongside Champions League winner Jorginho, Italy came out for the second half searching for a way to break down their foes and coach Mancini meant business by whipping off his smart custom-made blazer.

Something Turkey had failed to do in the first half after soaking up pressure and defending compactly was hit Italy on the counterattack.

Rectifying this, substitute and Leicester loanee Cengiz Under charged forward but was caught up with by regular Roma teammate Spinazolla who forced him into a tight angle.

The deflected shot made Donnarumma get down at his near post, but on Italy’s next move of note, the floodgates finally opened.

Jorginho providing the brains behind the move, he noticed Berardi’s run to the box, and when the ball came in, Juventus’ Merih Demiral fell over and cruelly converted into his own net.

Spinazolla and Italy running riot, the left back had a shot saved which spilled out for Immobile to overhead kick, and then Manuel Locatelli had a good low-driven effort knocked around the post by Cakir’s fingertips.

When it seemed that the Italians might have missed their moment, ‘Star of the Match’ Spinazzola had a shot blocked that then spilled to Immobile to smash home for 2-0 on 66 minutes by expertly adjusting his body shape.

With Locatelli brought off to a standing ovation, there was more when Insigne got his reward to make it 3-0.

Cakir’s kick out was dreadful and intercepted, and a slick exchange of passes gave the pint-sized Napoli man the chance to finally get one of his curving shots right with his first touch.

Famously slow-starters in big tournaments, this was a bold statement from Italy who pressed until the end even with a big cushion, and will next face Switzerland at this same stadium on Wednesday.

Speaking to RAI afterwards, Mancini was more than happy with the display.

“We had a good game, even in the first half when we could not find the goal,” he said.

“The match wasn’t easy because it was the first [of the tournament for us] and they’re a strong team.”

“In these matches you need everything,” he went on.

“There was also the help of the crowd. We are happy and the team played well. It was decisive when we moved the ball quickly to the opposition’s half and freed a man.”