Home / photo report / It looks like the front car of Hitler. Photo

It looks like the front car of Hitler. Photo

Soon the auction will be sold to Mercedes-Benz Grosser 770K Offener Tourenwagen 1939, the year that served as the main front car of the führer of the Third Reich of Adolf Hitler.

This instance was the main front car of the head of Nazi Germany from October 1939 to may 1941. After the surrender of Germany unique limousine fell into the hands of the us army and was transferred to the USA in 1945. Since then it has changed several owners, among which, for example, was the Imperial Palace casino in Las Vegas. Even without the fact that this car belonged to Hitler, it would be very expensive and unique.

A similar machine was used by the Emperor Hirohito of Japan, king of Norway, the Portuguese dictator Salazar, and his Spanish colleague Franco and even the Pope Pius XI. And all of them only 203 were produced. At the time it was a car that fully incorporates the highest technological advances of the automotive industry of the era. It was equipped with a 7.7 liter inline (!) 8-cylinder engine, which developed 150 HP This power unit allowed a huge and very heavy convertible to speeds up to 160 km/h. However, speed was not a primary indicator. 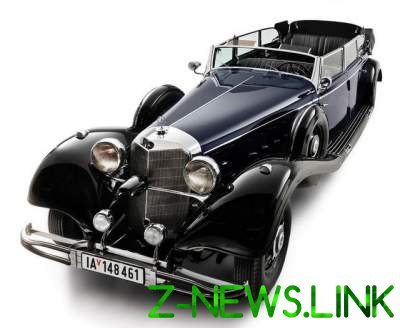 Now, this Mercedes is much more than just a car. This is the greatest monument to the history of the 20th century. Even more what makes it unique is the fact that all of these machines have survived only five. Last time it was sold back in 1973 and then he managed to the buyer in 153 thousand dollars. But don’t think it’s cheap – then it was a record price for a car in history. This time the amount can grow more than 100 times. By the way, 10% of the amount will be transferred to projects that convey information about the main crime against humanity in history – the Holocaust.

Bidding will take place in the middle of January the event called Scottsdale Collector Car Week in 2018, where one area will place bids from the most well-known auctions, such as RM-Sotheby’s, Barrett-Jackson, Gooding &Co., Bonhams, Russo and Steele, Silver Auctions and Auctioneers Worldwide.