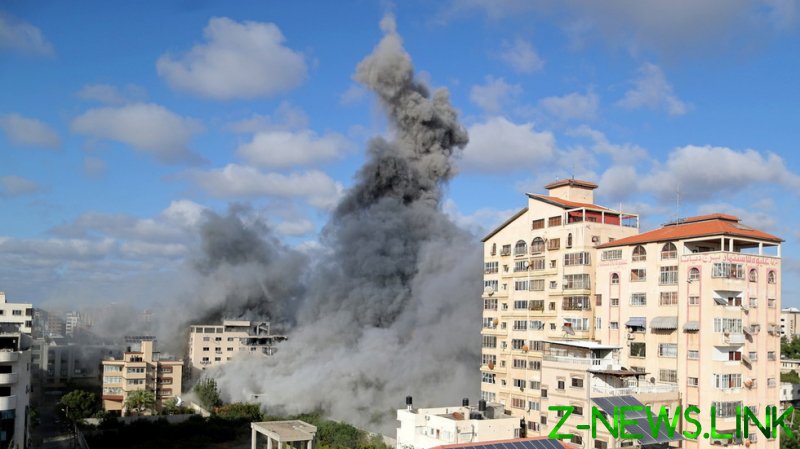 At least two people were killed and 10 others wounded following an Israeli attack on a commercial building in Gaza, which hosted, among others, the offices of the Qatar Red Crescent Society (QRCS). The building was “severely damaged” by the strike, the group said, with the humanitarian office there being “destroyed.”

“Targeting civilian objects is a blatant violation of the humanitarian law,” QRCS said in a statement. Despite the incident, the QRCS added it will continue to “provide relief aid to the affected people in the Gaza Strip.”

Earlier, the IDF announced it had hit what it claimed were the headquarters of Hamas’ Internal Security in northern Gaza, among other targets, and posted a video of a collapsing building on Twitter.

The strike was reportedly preceded by a so-called ‘roof-knock’ bomb – a smaller projectile fired by the IDF at the roof of a building to warn those inside that it’s going to be brought down and give them some time to evacuate.

Israeli forces say they destroyed 16 rocket launchers, including 10 stationed underground, across Gaza during the day. Several homes of Hamas commanders were also targeted by the IDF planes, along with the group’s headquarters.

Hamas has accused Israel of intensifying strikes against what it called “civilian homes,” proposing to attack central Israel – including the country’s largest city, Tel Aviv – in retaliation.

Rocket sirens were blaring in Ashkelon, Ashdod, and other cities in southern Israel on Monday. The IDF said that at least 190 projectiles have been fired from Gaza, with most being shot down by the Iron Dome air defense system.

Cross-border strikes between the IDF and Hamas have been ongoing for a week now after violent clashes in Jerusalem, where Palestinians were protesting plans to evict several local families.

The IDF said that the Gaza-based group has fired more than 3,000 rockets at Israeli territory since last Monday. At least 10 people were killed and 50 injured in Israel by those attacks, according to media reports.

According to the Gaza Health Ministry, the strikes by Israel resulted in the deaths of at least 218 civilians, including 58 children, with more than 1,300 others being wounded.