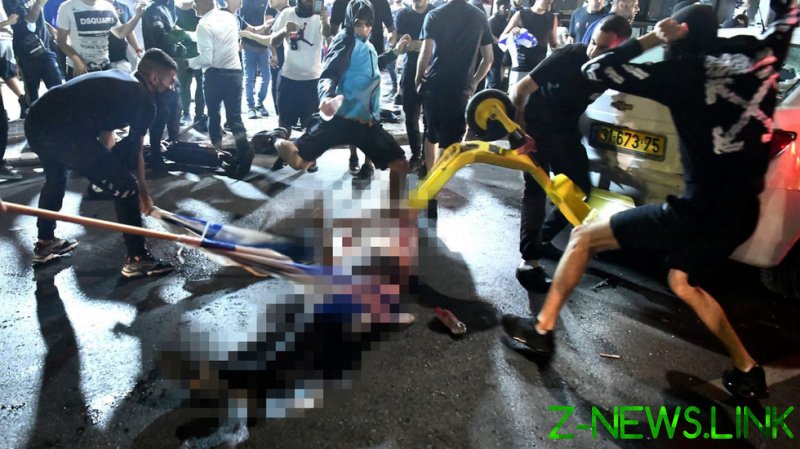 Footage from Wednesday evening showed a man being dragged from his car, beaten and set upon by dogs in Bat Yam, Tel-Aviv, and was aired live by state broadcaster Kan.

While the violence was broadly condemned on social media, many commentators focused on the fact that Kan, the Israeli Public Broadcasting Corporation, aired the horrifically violent footage live on national television.

One Twitter user labeled the Israeli media “incorrigible perverts” for “showing [the] mob lynching of an Arab live on national TV.” He added that it reminded him of scenes he had seen on Indian TV.

Another commentator questioned Israel’s reputation as the most progressive country and only democracy in the Middle East, claiming that Israel is the only nation where you can watch someone being dragged from their car and lynched by a crowd of hundreds on live TV.

“At what point do we say Israel has a white supremacy problem?” another person tweeted, adding that this brazen violence on a ‘non-white’ man took place “in FULL VIEW of a TV camera.”

However, some weren’t so critical of the broadcaster’s decision to air the footage. “Should be shown over and over again on Israeli TV for several weeks so people can see the inevitable. Young blood thirsty cowards with no fear of justice,” one person wrote.

Others hit out at the Western media organizations that had highlighted Kan’s broadcast of the lynching. One suggested that AFP, a leading global news agency which drew attention to Kan’s decision to air the lynching, was “infected by fake news” and that it “supports [the] largest socialist #organizedcrimesyndicate [in the] world.”

Another commentator called on AFP to focus on the violence initiated by Palestinians against Israelis.

Wednesday’s disturbing footage comes amid escalating violence between Israeli forces and Palestinian militants, as well as increasing civilian unrest which has seen both Arab and Israeli groups engage in heated demonstrations.

The Jerusalem Post reported that an angry mob of Israeli far-right activists had been marching around the Bat Yam, a suburb of Tel-Aviv, on Wednesday evening, terrorizing non-Jews and smashing Arab-owned businesses.

The victim of Wednesday’s aired lynching is reportedly in a stable condition and improving. Some reports suggest he was actually Jewish.