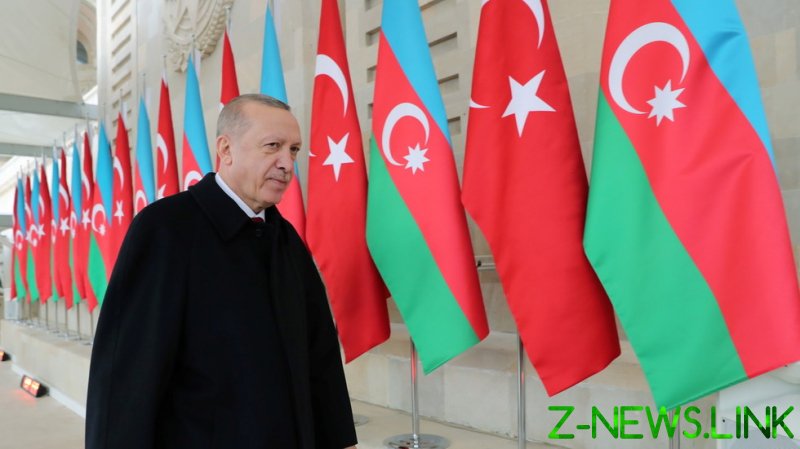 Mohammad Javad Zarif took to Twitter on Friday to correct Turkish President Recep Tayyip Erdogan, who had claimed that Iranian provinces in Azerbaijan were part of the Republic of Azerbaijan while reciting a poem.

While the Republic of Azerbaijan is a former Soviet republic, Azerbaijan is also the name given to a large area of consisting of three provinces in northwestern Iran.

The foreign minister reiterated these sentiments in another, similar tweet in Farsi.

“They separated the Aras River and filled it with rocks and rods. I will not be separated from you. They have separated us forcibly,” Erdogan said in his recital, during a speech at a Baku victory parade on Thursday.

The Aras River became the northwestern frontier of the Persian Empire and later Iran, following a series of military defeats at the hands of the Russian Empire in the 19th century, leading Qajar Persia to cede all of its territories in the North Caucasus and Transcaucasia to Russia.

During his epic recital, the Turkish leader also mentioned two places, Arg of Tabriz and the Sabalan Mountain, firmly situated in Iranian Azerbaijan.

Erdogan’s recital has sparked outrage across social media platforms, with many Iranian users warning against the Turkish leader’s “neo-Ottoman” ambitions in relation to Iranian territorial integrity.

“Azerbaijan has always been not only the protector of the land of Iran but also one of the founders and main pillars of Iranian civilization. Erdogan’s move should be condemned. But what do those who deliberately ignore things in Iran say about this?” tweeted Abbas Akhoundi, a former Iranian minister.