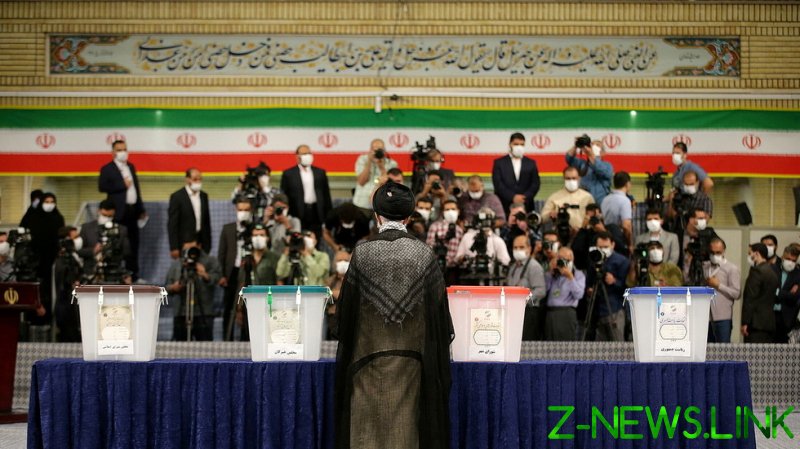 Polling stations opened across Iran on Friday, with around 60 million people eligible to vote. The supreme leader, Ayatollah Ali Khamenei, was the first to cast a ballot, as he urged everyone to vote.

“Each vote counts… come and vote and choose your president… this is important for the future of your country,” Khamenei said.

The outgoing president, Hassan Rouhani, called on citizens to “make our friends… all Iranians happy and our enemies disappointed,” by showing a high turnout.

The election is not expected to hold much intrigue, with Iran’s judiciary chief and close ally of Khamenei, Ebrahim Raisi, projected to secure a solid win. Hardliner Raisi also ran in 2017, losing by a wide margin of almost 20% to the incumbent president, Rouhani, who is barred from running again due to legal limitations allowing two consecutive four-year terms, which he has already served.

Raisi is already the subject of sanctions imposed on Iran by Washington. The high-profile official was targeted by the US after he was appointed as judiciary chief in 2019, with Washington accusing him of involvement in the execution of political prisoners in the 1980s and the suppression of unrest in the late 2000s.

While more than 600 people submitted bids to the Guardian Council, a 12-member panel directly under Khamenei, only seven candidates made through it.
The panel disqualified political heavyweights such as hardliner Mahmoud Ahmadinejad, who served as president from 2005 to 2013, as well as former parliamentary speaker, conservative Ali Larijani.

The decisions of the council against some of the presidential hopefuls were criticized by Khamenei himself. The supreme leader said some of the disqualifications were unjust, urging the panel to reverse some of the decisions.

“Some candidates were wronged. They were accused of untrue things that were unfortunately spread throughout the internet too. Protecting people’s honor is one of the most important issues. I call on the responsible bodies to restore their honor,” Khamenei said earlier this month. The Guardian Council, however, said its rulings were final and did not reverse any of the bans.