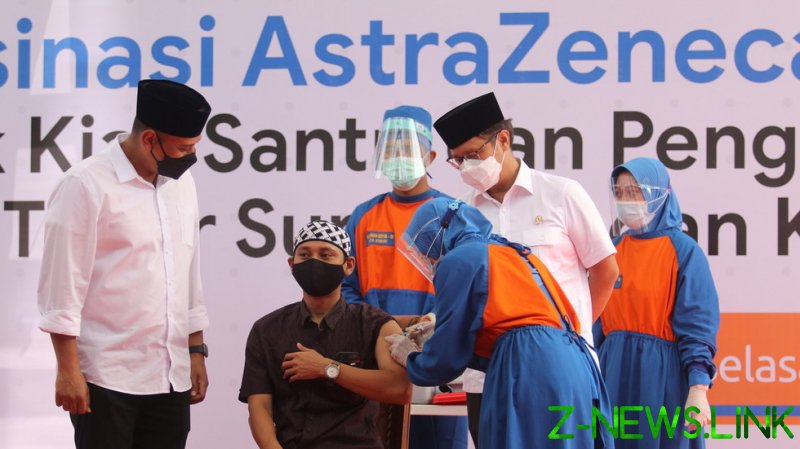 The move was announced by the Indonesian Health Ministry on Sunday. The suspension follows the abrupt death of a 22-year-old man, who died a day after getting an AstraZeneca jab originating from the batch.

“This is a form of caution by the government to ensure the safety of this vaccine. The Ministry of Health urges the public to be calm and not be swallowed up by circulating rumors,” the ministry’s spokesperson said in a statement.

The offending batch, known under the designation ‘CTMAV547’, consists of some 448,480 doses of the vaccine. It’s part of a nearly four million shot delivery allocated to Indonesia under the COVAX program, backed by the World Health Organization (WHO).

Previously, shots from the CTMAV547 had been distributed in the capital city of Jakarta, as well as in the ranks of the country’s military, according to the health ministry.

The “sterility and toxicity” tests will be performed only on the suspicious batch, and the distribution of the rest of Indonesia’s AstraZeneca stockpile will continue uninterrupted.

“The use of the AstraZeneca vaccine continues because the Covid-19 vaccination brings greater benefits,” the ministry stressed.

The CTMAV547 will remain shelved for at least two weeks while the “sterility and toxicity” tests go on, the head of the vaccine monitoring committee, Hindra Irawan Satari, stated.

“After it is proven that it is sterile and does not contain toxins, the use of the vaccine will be resumed. The fastest we can get the results will be in two weeks,” the official said as quoted by Reuters.

Home to more than 270 million, Indonesia has registered some 1.74 million cases of Covid-19 since the beginning of the pandemic. More than 47,000 people have succumbed to the deadly disease across the country. Jakarta has launched a massive vaccination drive to battle the deadly disease, fully vaccinating nearly nine million people already.