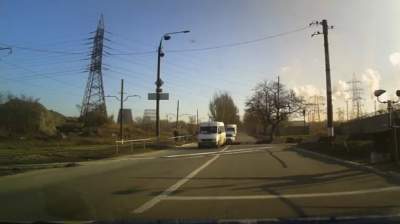 Patrol prevented a deadly maneuver on a railway crossing.

In Zaporozhye the patrol police prevented a terrible tragedy and did not allow the driver of the commuter bus to drive across the railway crossing after the closing of the gate.

The driver was going to slip in front of a train but was afraid of the presence of cops, the press service of the patrol police of Zaporozhye.
The incident occurred on November 28 moving along the street Northern highway in the Factory district of the city.

See also:  It looks like a black hole from the inside. Video

Patrol the crew noticed a Mercedes-Benz, despite forbidding signal of the traffic light train, tried to get moving, and almost drove into the rails.

At this point he noticed the cops standing on the opposite side of the road, handed back and stared at the already closed the gate.

The incident was recorded on video by the patrol car.

See also:  In "the simpsons" showed a parody of Pussy Riot. Video

Later, the driver made the administrative report under article “Violation of traffic rules through railway crossings”, he also had a seized driver’s license.