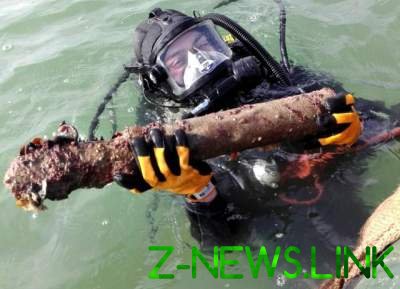 At the moment, with the German ship “Theodoric” seized about 13 thousand explosive objects.

In the Black sea near the village of Lebedevka in Odessa region rescuers carry out special work to lift ammunition during the Second world war, the sunken ship, according to the Department of Public service on emergency situations in Odessa region.

Divers-sappers, observing all security measures is carried out the extraction and transporting of hazardous items in a safe place for further disposal.

For the works involved vodolazno-life-saving part abnormally-saving group of a special purpose of GU gschs of Ukraine in Odessa region and the calculation of the underwater mine of the 1st Special rapid reaction center and humanitarian demining gschs of Ukraine, which included 3 units of special equipment, 1 boat, 10 people of staff

We are talking about the ship “Theodoric”, which sank on 12 November 1943 Soviet submarine M-111 under the command of Lieutenant commander Yaroslav Iosseliani. “Theodoric” was part of a military convoy. After the torpedo attack for some time he was kept on water and the German sailors managed to remove the crew of the torpedoed vessel.

Earlier it was reported that near Odessa in the summer found the German ship “Theodoric” sunk by submarine in 1943.

This period works on clearance, under the Odessa divers stir up the ammo from the sunken German ship “Theodoric”.