In the Odessa region detained a large consignment of contraband cigarettes. Video 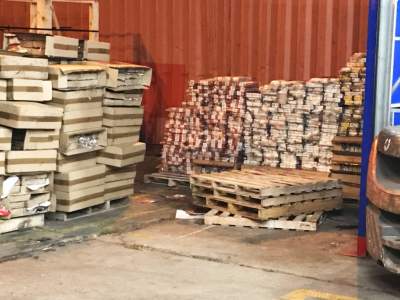 Discovered blocks of Marlboro and Camel with Ukrainian excise stamps

In Odessa region frontier guards together with customs officers found a batch of smuggled cigarettes to over 1.4 million. About it reports a press-state frontier service service.

“Yesterday in Odessa region, according to the operational divisions of the southern regional office, the state border service officers together with representatives of the SFS found a large party of illicit cigarettes”, the message reads.

See also:  In Brazil, the boat took off on the pier with people. Video

According to the press service, when conducting in-depth inspection of the container, which is followed with “charcoal grill” from Ukraine to Israel, was discovered by a party of undeclared excise goods for a total sum more than 1,4 million hryvnias.

So, cartons of cigarettes Marlboro, Marlboro Gold and Camel with Ukrainian excise stamps were inside disposable grills, which were covered with charcoal briquettes.

It is noted that the inspection of the container has brought a service dog and used technical means, in particular a scanning Rapiscan. As a result, the container was discovered 48 thousand packs of contraband cigarettes. Is checked.