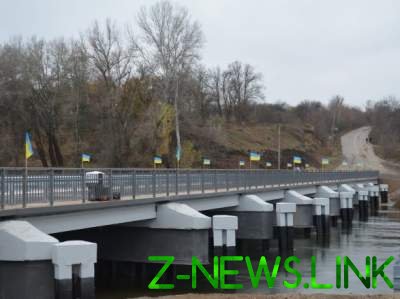 This is the shortest transport route from Luhansk region to Donetsk region.

Thursday, 26 October in Sochi, a solemn event: after a major repair opened bridge over the river Seversky Donets, connecting the two neighboring cities Lisichansk and Rubezhnoe.

It was destroyed by enemy shelling in may 2014.

The opening was attended by Secretary of national security Council and defense of Ukraine, Ministry of infrastructure of Ukraine, Luhansk regional state administration, Ukravtodor, the state specialtransservice and the like.

“It is important that the bridge is repaired by our military Department of the State special service of transport, which made a major contribution to mine action in the region and are now rebuilding the infrastructure”, – said Alexander Turchinov.

Today, this bridge can move trucks weighing up to 22 tons. This is the shortest transport route from Luhansk region to Donetsk region.

See also:  The death of the leader of the "LPR" in Luhansk: new details