In the Donbass there arrived the Minister of defence of Denmark 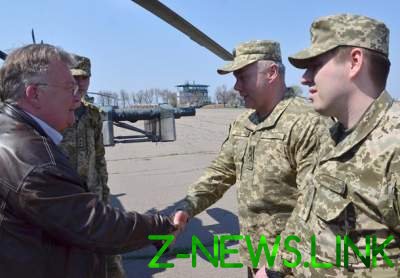 The commander of the United forces and Claus Frederiksen Hjort in Kramatorsk discussed the situation in the Donbas.

In Kramatorsk on Tuesday, April 23, the commander of the United forces Sergey Nev met with the Minister of defence of Denmark Claus Hjort by Frederiksen. This reports the press center of staff of environmental protection.

New familiarized the delegation members with the security policy in the area of operations and around the borders of Ukraine. He told about the numerous facts of violations of the ceasefire by the separatists. According to Neva, from the beginning of 2019 positions of the Ukrainian military, the militants fired at 932 times, of which 387 times – with the use of heavy weapons.

See also:  The area of the ATO, visited the Swedish Ambassador

“In addition to the constant shelling of the settlements, the armed forces of the Russian Federation is widely applied practice of mining settlements and adjacent territories. As a result of these crimes has increased the number of civilians who died or were injured,” – said New.

See also:  The Museum of the revolution of Dignity will be built in 5-7 years

He recalled a recent case where on February 23 of this year in the temporarily occupied territory of Donbas near the checkpoint of militants by anti-tank mine blew up a minibus carrying civilians.