Home / Video news / In Rome, the plane crashed on the railway track. Video

In Rome, the plane crashed on the railway track. Video 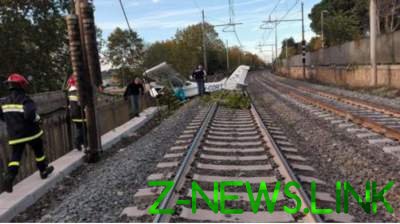 Because of the incident the movement of trains on the section had to stop.

On October 28 in Rome the plane fell on the railway track, causing two people were injured.

The nose of the plane crashed into a fence and trees next to the railway track, while the tail remained directly on her.

The victims are in hospital, their life is not in danger.

Because of the incident the movement of trains on the section had to stop and redirect traffic on the other railway track, which led to delays in schedule of trains.

At the crash site were working, the rescuers and police. The circumstances of the crash are being investigated. It is known that the plane belonged to a local flying club.