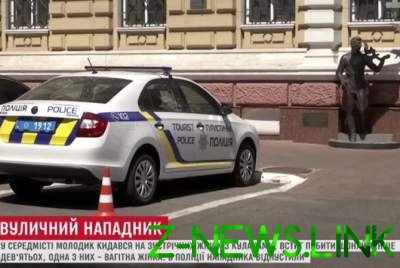 The police arrested him, but after a few hours released.

In Odessa at least nine women suffered at the hands of men, beating all he met of the fairer sex. The police the rowdy was detained, but soon released.

The incident occurred in the center of Odessa. A young man with his fists rushed to the unfamiliar women and girls. While aware of the 9 victims, but their may be more. One pregnant got hit in stomach and now in the hospital with threatened preterm labor. The assailant was detained caring citizens and handed over to the police. However, after a few hours he was released.

– Here I felt a sharp pain in the abdominal area and sat down. Caught his breath. I could not run after him, nothing. I was shaking and I screamed and told the victim she Sadychenko. The woman says she did not even realize that she was struck – distracted on the phone screen and did not notice the offender. When he caught his breath – looked around. Somewhere near that tree he hit with the elbow the other girl. She was wearing sunglasses, she’s got a bruise. She fell with a brush to the curb, she’s got a hematoma.

See also:  In the US competition gluttony ended in tragedy. Video

She wrote about the attack on its Facebook page, the comments began to unsubscribe girls who also suffered from the same men. Common forces identified the route of the youngster and the chronology of events. The first five minutes before nine striker met Olga, he hit her when she sat behind the wheel of his car.

– Turned his head and saw the face of the wholly inadequate man with no pupils. Only one question was in my head: what do you want? Hissed “Shh” and got punched in the jaw. In my eyes he committed an assault on two girls – said the victim Olga Belenko.

See also:  Saakashvili made a surprise announcement about his passport. Video

A few seconds of the attack Olga had to remove the phone – there striker smiles and shows her the middle finger. Two quarters, the girl followed him in the car, at the same time called the police, but at the intersection the boy disappeared from her sight. As it turned out, on the move, he continued to hit girls, the blows became more violent. Pregnant woman the guy punched in the stomach, and Julia received a powerful blow in the head – she even had to go to the hospital.

– It was a shock to me, I didn’t understand what was happening. When I started to cry – he’s just engaging that you have received, – said Yulia Liashenko and added that her statement to the police was its ninth in a row.