Home / Video news / In Lviv, a scandal for the map of Ukraine with “LDNR”. Video

In Lviv, a scandal for the map of Ukraine with “LDNR”. Video 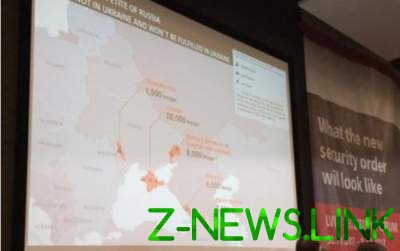 The card is revealed during a security forum.

Sinyutka called the forum “an element of a hybrid war” and “provocation” and threatened to appeal to the SBU, and then left the room.
Sinyutka came on the scene and began to protest the moderator of the forum Miroslava Gongadze, Vice spikeru Oksana Rawfoodist as well as the city’s mayor Andriy Sadovy, who opened the first day of the Forum.

Sinyutka, in particular, stated that this forum is part of the “hybrid war” and “provocation.”

It is noted that this statement provoked laughter among the participants of the event who came to Lviv from various countries and of the leading analytical centers of the Europe and the USA.

In response, Oksana Rawfoodist suggested Oleg Sinyutka to appeal to the President of Ukraine, who signed with representatives of LDNR Minsk agreement. According to her, the map was made to demonstrate the presence of Russian troops on Ukrainian territory.

Later from the site of the Lviv regional administration it became known that the Governor appealed to the security service.