Home / Video news / In Kiev the police have tried to recapture the detained pensioner. Video

In Kiev the police have tried to recapture the detained pensioner. Video 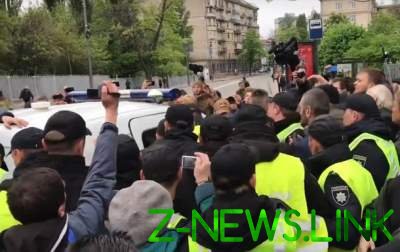 Woman in military uniform USSR detained before the action “Nobody is forgotten, nothing is forgotten!”.

Before the “campaign” Immortal regiment in Kiev on Thursday, may 9, police arrested for illegal symbols with an older woman. She was put in a police car, but those present tried to recapture detained by the police.

Immediately after arrest, the woman said the sharp deterioration of health, from-for what the police had to call it “fast”.

Later, when the police tried to deliver the arrested to the station, the other protesters tried to discourage a woman from the police. In particular, they threw themselves under the wheels of a car and tried to go to open the car door when the police made their way through the ring of the participants. Eventually, the police still took the woman.