In Iran happened two earthquakes with a difference of 10 minutes 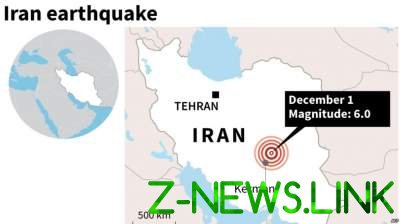 First day of winter in Iran began with two rather noticeable aftershocks.

Two rather powerful earthquakes occurred in the East of Iran on December 1. The US geological survey said the first quake with magnitude 6 was recorded at a depth of 10 kilometers near the town of Kerman, which has a population of more than 821 000 people. Ten minutes after it happened less than a powerful earthquake of magnitude 5 in the same area.

“There is no information about the deaths of people there, but in several villages there is destruction,” – said on state television employee rescue Department in Kerman.

The seismology center of Tehran University gave approximately the same estimate of the power of earthquakes, as Geology USA.

An earthquake of magnitude 6 points is considered to be strong and able to cause serious damage. These aftershocks occurred more than 2 weeks after the earthquake at 7.3 points, with the result that killed more than 400 people in the Western province of Kermanshah, near the border with Iraq.

In 2003, a powerful earthquake destroyed most of the ancient city of BAM, at least 31,000 people killed.