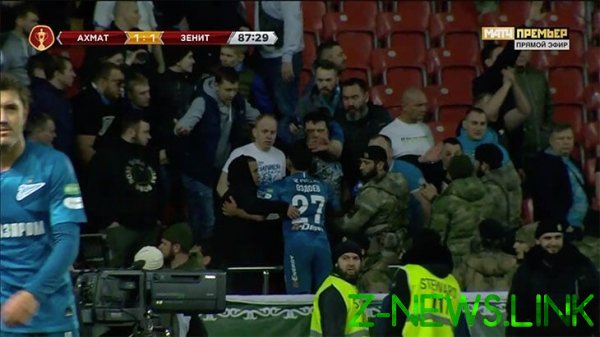 In fact, you don’t want to write about another inappropriate outburst on the football in Grozny. This topic is tired of it all and, alas, it turns out that it is a cross of RPL, which must bear. And big trouble screaming into the microphone there, but when danger threatens supporters of the guest teams, football officials just have to deal with this serious problem. I fear, however, will be limited to disqualification on one or two games. Moreover, in Grozny there is a second stadium, which “Ahmad” can safely play the proper number of matches.But still several considerations you need to make.

1. Football for the fans. There are rules written, is unwritten. In a normal European country stripped to the waist fans is normal. Well, it never occurred to anyone offended, except for residents of Grozny. Therefore, it is necessary to choose – to play in the Championship of Russia with all the traditions or play according to the local customs with local teams. Fans of “Zenith” has not left the territory of Russia and behaved as always acting on the territory of our country.

2. It amazes me the reaction, including coach of “Zenit” Sergei Semak, who says that tradition should be respected and honored. Maybe not, but who warned the fans. And claims to them were not the stewards or clubs, and a few fans of “Ahmad”. But to run with his fists to force them to honor the tradition is, of course, a deviation of some kind. Given the fact that guests any aggression did not show, the mood was peaceful.

3. Well done to the players, “Ahmad” Oleg Ivanov, Andrey Semyonov and Yevgeny Citiesthat stood between the warring parties and prevent a terrible. Fellow Zenit player Magomed Ozdoevwho approached her, they were two parties, and repaid the conflict.

4. The stadium should be disqualified. And it would be necessary to revisit the question of whether it is possible in Grozny to play football. This is a serious issue, more serious than the coronavirus, because there are some anomalies occur regularly. And you must decide this taking into account the interests of fans, including visiting teams.

Yes, and I have no doubt that at the next meeting of the RFU, which will be discussed in this episode, all the participants will sit and look at a table. No other way to behave, these people do not know how. If there is any reaction, only from the fans, such solidarity will be an important demonstration of citizenship.