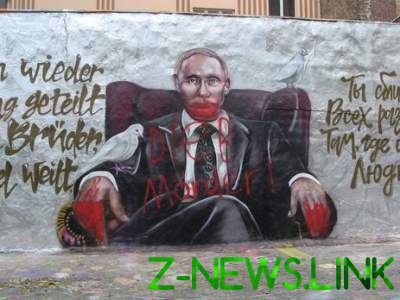 The artists added some unflattering reviews.

On graffiti in Berlin with the image of Russian President Vladimir Putin appeared the inscription “murderer” and “thief”. About this Facebook said the Russian sociologist and political scientist Igor eidman.

“Virtually all of Putin’s media trumpeted the fact that in the centre of Berlin on Putin’s birthday his fans made a complimentary graffiti. Actually just worked a paid Putin’s PR people, which in Germany is sea,” he wrote.

“Russian-speaking Europeans did not long tolerate this outrage. Already a day on this graffiti were signs Mörder and Dieb (i.e. “murderer” and “thief”), and the hands and mouth (Putin – ed.) was flooded with blood-red paint,” said eidman.

Recall that in the Berlin street artists have painted Putin in a chair surrounded by two doves, one of which sits in his right hand.