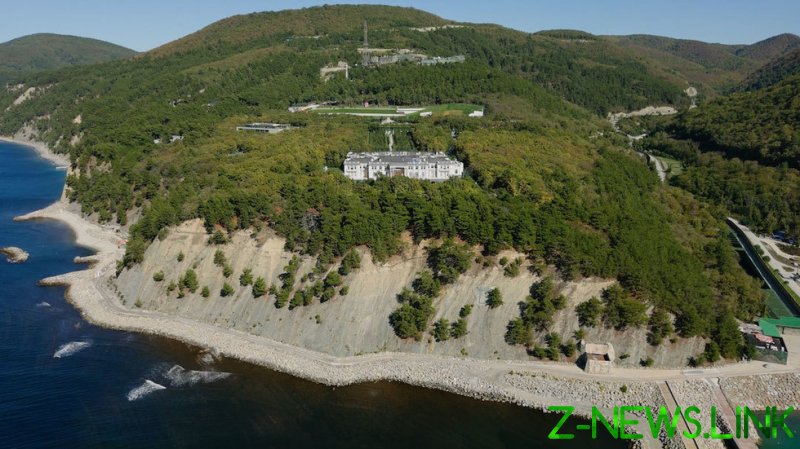 The businessman gave a short interview to Telegram channel Mash regarding the construction site in southern Russia, which remains the focus of intense rumors both inside the country and in foreign media. Asked if he was acknowledging owning ‘Putin’s palace’, Rotenberg said: “This will be a secret no more. I am the beneficiary.”

He added he intends to use the location as an apartment hotel, once it is finished.

“I like the hotel business…and have been involved in it for several years now,” Rotenberg said, adding that he owns several ‘objects’ throughout Russia. He said the site in question has a troubled financial history, but he nevertheless acquired it a few years ago, putting faith in its “gorgeous” coastal location.

“This project is somewhat scandalous and difficult. But mark my words, in 12 or 18 months I’ll invite you to witness for yourself what beauty it will be,” he told Mash editor-in-chief, Maksim Iksanov, joking that the journalist may get a discount since he already snuck in to see his property.

The so-called ‘Putin’s palace’ is located at Cape Idokopas, about 17km southeast from the city of Gelendzhik.

The team of Russian opposition figure Alexey Navalny last week released a two-hour expose, complete with corruption allegations against Putin, floor plans and computer-generated images purporting to show what the palace is supposed to look like eventually. The video was touted as displaying the Russian president’s mindset and called on viewers to take part in anti-government protests.

The Russian president denied owning any of the property featured in Navalny’s video, while Kremlin spokesman Dmitry Peskov branded the corruption accusations as “an outstanding myth.”

The film was launched days after Navalny returned to Russia from Germany and was taken into custody, pending a court review of his parole. The opposition activist was given a suspended term over an embezzlement case and was supposed to stay in the country. He was flown out last August after a medical emergency, which he claims happened after a failed assassination attempt by agents of the Russian security service, the FSB. The Russian government denied sending poison-armed hitmen after Navalny and accused him of working with foreign intelligence to discredit Moscow.

Earlier this week, Mash published a report by Iksanov, who gained access to the construction site and showed that it was far from being completed. The Telegram channel is a popular news outlet, sporting almost a million subscribers.