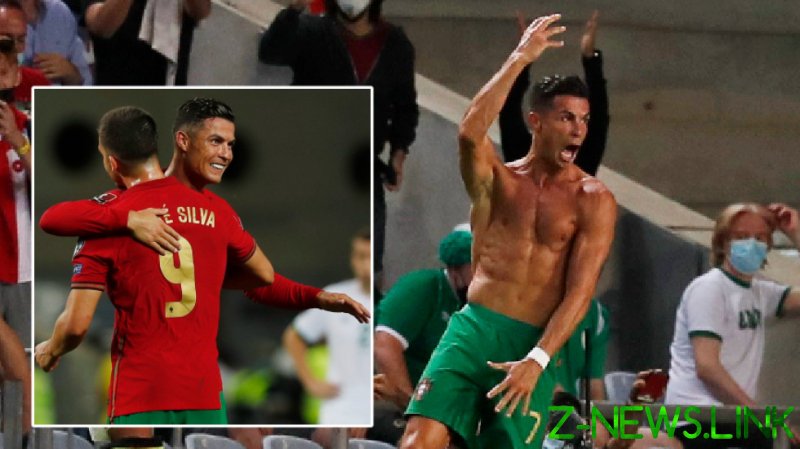 Few could have foreseen the frustration Ronaldo would have to endure before he finally broke legendary Iran striker Ali Daei’s all-time international goals total, spurning the simplest of chances to finally reach 110 goals when his 15th-minute penalty was saved by 19-year-old Ireland and Manchester City goalkeeper Gavin Bazunu.

Ireland had looked set for a huge upset in the World Cup 2022 Qualifier in Faro, compounding Ronaldo’s misery following the spot kick – when the Portugal captain also became involved in a flashpoint with defender Dara O’Shea – by taking the lead through John Egan’s header after 45 minutes.

Just when the visitors seemed to have held out for a famous away win, Ronaldo produced one of his hallmark leaps to power a thunderous header past Bazunu from a Goncalo Guedes cross with a minute of normal time remaining, then repeated the trick from a Joao Mario delivery with seconds to spare.

“This record is mine and it is unique,” the five-time Ballon d’Or winner smiled afterwards. “I’m extremely happy and it’s another one for my career.”

Asked where his seemingly unquenchable motivation comes from, the 36-year-old replied: “The desire I have to continue playing football – also from this last contract I made [with United], in which I was happy to return home.

“If we get up every day with the ambition to do better, to make the fans and our children happy, that is essential.

“The important thing is always the team. I believed until the end and that’s why, with 10 minutes before the end of the game, I called for the support of the fans.

“We are playing at home and when we, the players, are not connecting on the pitch, the supporters’ help is essential. They gave us strength.

“I’m happy to help with the victory and break the record, but the most important thing is the team.”

Portugal boss Fernando Santos was relieved but unsurprised after his team’s path to the Qatar World Cup was eased by their talisman. “Ronaldo is like that – he has always been that,” said the coach.

“Great players are like that: the game may not be going very well but they come up with all the solutions.”

Ronaldo’s record will take some beating: the former Juventus, Real Madrid and Sporting Lisbon superstar and Daei are the only two male players to have scored 90 or more goals in international football.