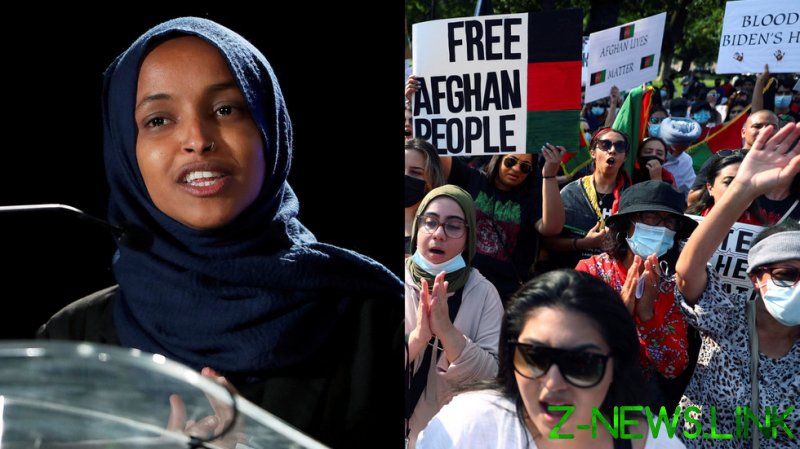 Appearing on Saturday’s broadcast of MSNBC’s ‘Velshi,’ Omar was asked by guest host Medhi Hasan whether it was “surprising” to see Biden “now standing up to the defense establishment, to the generals, to the hawks, including in the media, and sticking to this withdrawal timetable, ending America’s longest war?”

Biden has faced heavy criticism from pundits and lawmakers alike, some of whom like Sens. Lindsey Graham (R-South Carolina) and Josh Hawley (R-Missouri) have begun calling for the president’s resignation or impeachment over the Afghanistan withdrawal mission.

Teed up, Omar praised Biden for ending the war – a promise held by his predecessor Donald Trump, as well – and not allowing “the pressure being mounted in the media and in Washington” to derail the mission.

Biden has faced heavy criticism from pundits and lawmakers alike, some of whom like Sens. Lindsey Graham (R-South Carolina) and Josh Hawley (R-Missouri) have begun calling for the president’s resignation or impeachment over the Afghanistan withdrawal mission.

Biden released a statement on Saturday, promising to continue sticking to the August 31 deadline, but also warning that a second attack could be coming within the next 24-36 hours. This would follow the bombing outside the Kabul airport this week by ISIS-K. That blast took the lives of 13 US service members and dozens of others.

Despite that bombing and the retaking of the Kabul airport and other major areas by the Taliban in a matter of days, Omar, a vocal critic of the war efforts in the Middle East, praised the evacuation mission as “inspiring.”

“The level of evacuation that his administration has been able to undertake is really inspiring. And there’s important work that’s getting done. Even after the terrorist attack at Kabul airport, we continue to airlift and evacuate people,” she said.

According to Biden, approximately 117,000 people have been evacuated out of Afghanistan, more than 6000 of those within the last 24 hours.

Omar, who was a refugee at one point herself, has also called for the US to take in as many refugees as it can from Afghanistan.

“We’ve made promises obviously that we couldn’t keep,” she said, “but the one promise we can keep is making sure that we protect everyone that has been made vulnerable because of our mission.”

The congresswoman is one of dozens of lawmakers recently to sign her name to a letter to Biden, requesting he raise the refugee cap in light of the situation in Afghanistan.

“After decades of disastrous U.S. intervention in Afghanistan, one thing is clear: we have a moral responsibility to provide safe harbor and refuge for the Afghan people,” the letter read.