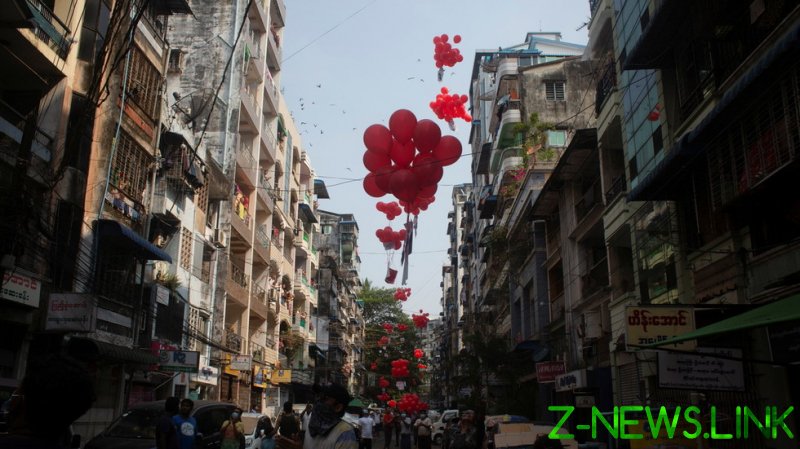 The detainees were released from Insein prison of Yangon, Myanmar’s largest city, on Wednesday. Some 16 buses carrying the freed protesters left the penal facility early in the morning, according to lawyer Khin Maung Myint.

“They were sent to related police stations to go back home… Some clients called me [after] informing me of their release,” he told AFP.

All the released people had been detained during the ongoing protests that have rocked the country since the February 1 military coup, as well as some from “night arrests or those who were out to buy something,” a member of a legal advisory group, who witnessed the release, told Reuters.

So far, Myanmar’s military did not provide any information on the reasons for the abrupt release or the number of people freed. An anonymous prison official told AFP that “360 men and 268 women” have been freed.

The figure suggests that roughly one third of people detained by the police and military during the unrest were freed. The total number of people detained during the protests is estimated to stand at least at the 2,000 mark, according to the Assistance Association for Political Prisoners activist group. Dozens of people have been killed and injured during the brutal crackdown unleashed on protesters by the military.

Myanmar has endured unrest for nearly two months now, after the military ousted the civilian government, arresting its leader Aung San Suu Kyi, the president and other top politicians. The coup ended a nine-year period of civilian rule in the country. Military governments controlled Myanmar for decades from the early 1960s until 2011.

Myanmar’s military has promised to hold an election and surrender power back to civilians after the passage of an unspecified “certain time.”

The military accused the ousted head of government Suu Kyi of election fraud, that allegedly helped her to secure a comfortable win in November polls. On top of this, she has been accused of other wrongdoings, ranging from smuggling illegal electronics to corruption. Supporters of the ousted leader, however, believe the accusations to be politically-motivated.